The Second Day in Singapore

Singapore felt safe, sophisticated, modern, hip ’n cool, clean, grand and down right gorgeous. It was everything I imagined it to be and I could easily see myself living there. The city is massive but I didn’t get overwhelmed or distressed by it, like I did when I visited Bangkok on February. The city is also quite touristy so on the second day I wanted to see something else than just the regular tourist attractions which you have to pay for.

My number one mission on my second day in Singapore was to find a hipster café. I overachieved my goal by finding not only one but two hipster cafés! Imagine the joy!

I found the first café, Chye Seng Huat Hardware, after some serious Google research, was located about 15-20 min walk from my hostel. About half the way to the café I went to get some lunch at the Aperia Mall’s food court. During that time I messed up my Google map somehow and lost the directions to the café. I didn’t even remember the name of the place anymore. So after lunch I just kept walking and hoping that the café will magically appear at some point. And it did! I remembered the location on the map roughly and tried to find my way over there. I was just about to give up and checked from a paper map where to head next. When I looked over my shoulder I realized that I was standing next to the café. Hip, hip hipster hooray!

After drinking this hand brewed Lamari coffee, I died and went straight to coffee heaven. The Chempedak Crumble dessert worked perfectly with the fruity tasting coffee because it had pieces of jackfruit inside.

Cup of Joe at CSHH is a bit pricey but worth every penny. You can also order food there and the dishes I saw looked really delicious. The only downside was that they didn’t have wifi.

It was hard to take a good picture of the Chye Seng Huat Hardware cafeteria because it was packed with locals.

There’s a roastery and a beer brewery at the back of the terrace of the CSHH. I might have to try out some of the IPA’s there next time I’m in Singapore.

After Chye Seng Huat Hardware I checked out the Little India and Kampong Glam areas in the city and found this cute little cafeteria called Tolido’s Espresso Nook along the way. Unfortunately I was running out of Singapore dollars so I had to order the cheapest possible coffee on the list which was Ristretto. It was my first and definitely last time I tasted Ristretto. The most bitter tasting coffee I’ve ever had. I bet the other coffees there would be awesome so I’m planning on going there again next time I’m in Singapore.

The inside of Tolido’s. They had really nice customer service, reasonable prices and wifi.

I saw some cool restaurants and bars when I was heading towards Bugis MRT station from Tolidos to go back to the hostel. I had only few Singapore dollars left at that point so I had to skip all the tempting restaurants and had to settle for a cup of noodles for dinner. The area near Bugis seemed very nice so hopefully I’ll be able to find a cheap hostel somewhere around that area for my next stay. I can’t wait to get back to Singapore ‘cos I’m also planning on going to the ZoukOut music festival which takes place on December 9th and 10th. I’ve always wanted to go to a music festival outside of Finland so it seems that I’m making many of my dreams come true during this trip. 🙂

Having noodles for lunch and/or dinner is one of the easiest way to save few bucks when budget travelling.

Where the F is Amed?

Yolo – You Only Live Once 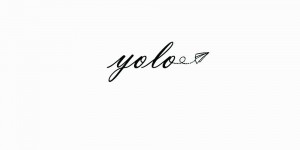 I am soon to be 30-year-young Finnish woman who decided to quit her job and travel through Asia instead. If I am here only once, I better make the most of it!