First day at the language school

I booked my language course through EF. I was considering also another company called Speak and Fun but I was unable to find any references so I played it safe and booked well-known company instead.
All in all the course was about 1400. My course is general. Which means I have 10 general English courses, some ipad lessons and also two lecture lessons.

We received email which told us to arrive to school at 8.30 on Monday. We had to take a passport and insurance card with us. (en osannut kirjoittaa vakuutus-sanaa ilman apua, lausua sen osaan kyllä, monien sanojen kanssa on näin tai sitten toisinpäin).
I’m staying with host family. In my case it is only a man and a cat. Also there is another student from Thailand but we are not sharing the room. So we both have our own rooms which is quite nice. The host family offer us also breakfast and dinner. We can also use wifi but it cost 25$/week which is quite much..I think after first week I’ll use internet at school only, it’s free there.
It is really nice that there is another student here at the same time. On my first morning she wanted to show me the way to the school (even though her classes starter after 1pm today!). Because our host family lives quite far from downtown it takes about one hour to reach the school. And one way cost around 6$. Also we had to wake up around 6am. Luckily tomorrow my first class starts at 1.40pm (eli 13.40 hitsi vie, en tykkää am ja pm hommista).

So together with Thai girl we arrived on time to the school and were just sitting at the school hall. Then new students started to arrive and at 8.30 the staff was ready to log us in. (en tiedä voiko noin sanoa 😀
At the ”reception” they asked the passport and insurance card. They took a pic of us for student card which we have to wear all the time when we are in the school.
Then we had some free time, they offered tea/coffee and huge muffins. We get to know each others.There was about 10 new students starting, only one female besides me. Before arriving we had made placement test online but we still needed to do speech test. It was just 10 min. chat with one of the teacher. Very friendly atmosphere, questions were like: why are you here in Auckland? What do you do? And so on. After the speech test we had again some free time. It was raining so we just stayed inside the school building. Some students hadn’t done the online test so we were also waiting them to finish. While we sat there talking, the person who are responsibility of the activities came to talk to us. It was also for him the first day in the new job! He was very enthusiastic and give us some info what we can do while we are in NZ. After the chat he went do some things and then we were asked to come for the presentation.

First the head of the school talk to us blablabla (it wasn’t boring but it was just info about the city of Auckland and practical information like school rules and so on), then the head of the studies shared his part. He told about the language levels and what our studies contain, after him, again, the activity organizer stepped in and give us again some ideas what to do while we are here. While he spoke our levels were set. After the nice activity talk we had short break (for toilet/more tea/whatever) and then planned to head for a city tour. Before the tour started we got our schedule and also it said the level we are at.

The walking city tour was quite short because the weather was bad. Anyway we visited the important parts as where to buy bus card and so on. After the tour we were off and hungry so someone of us went to eat. So that was the first day of EF language school in Auckland. 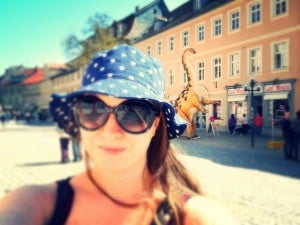