Goshoboh-ryokan in Arima Onsen, Kobe – luxury in a Japanese way 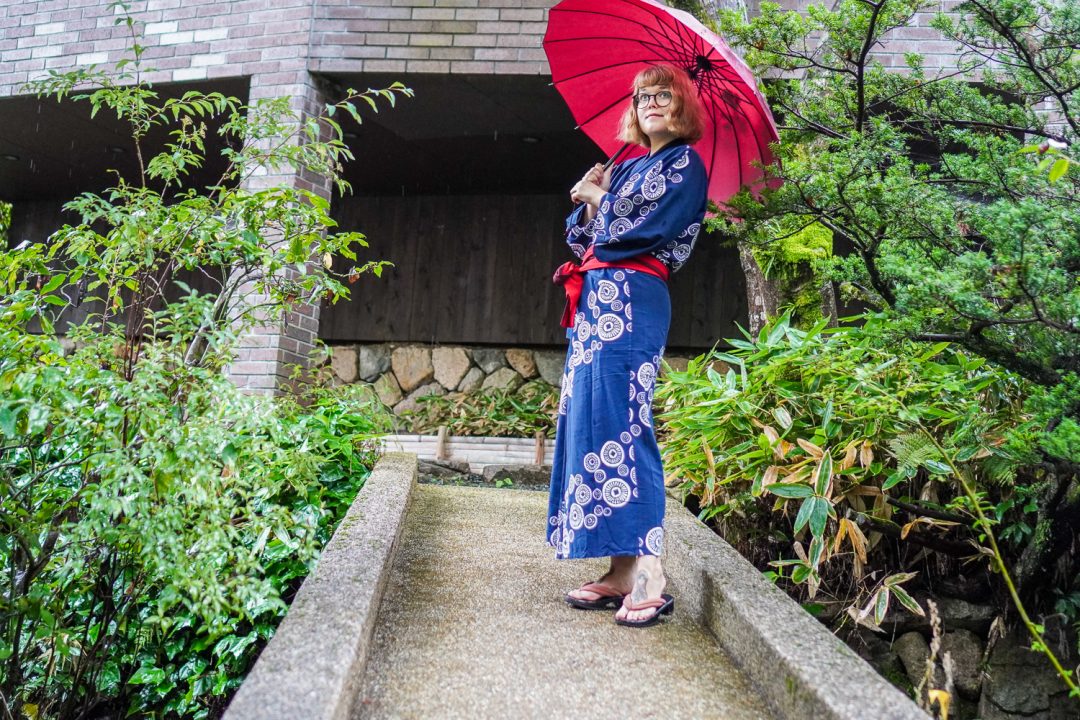 Japanese luxury isn’t golden plating and chandeliers. It’s moderate and warm hospitality: omotenashi. The best place to experience that is a trip to a Japanese ryokan.

If you ask me tips for a trip to Japan, I’d recommend staying in a ryokan. I’m not the one to talk though. I’ve spent only one night in ryokan because it’s never the cheapest option. But if you combine great accommodation with bathing in an onsen, delicious multi-course dinners, breakfasts and sleeping on a tatami, how could it be?

That’s why I was very delighted when Goshoboh -ryokan in Arima, onsen town of Kobe, contacted me and asked to come over. 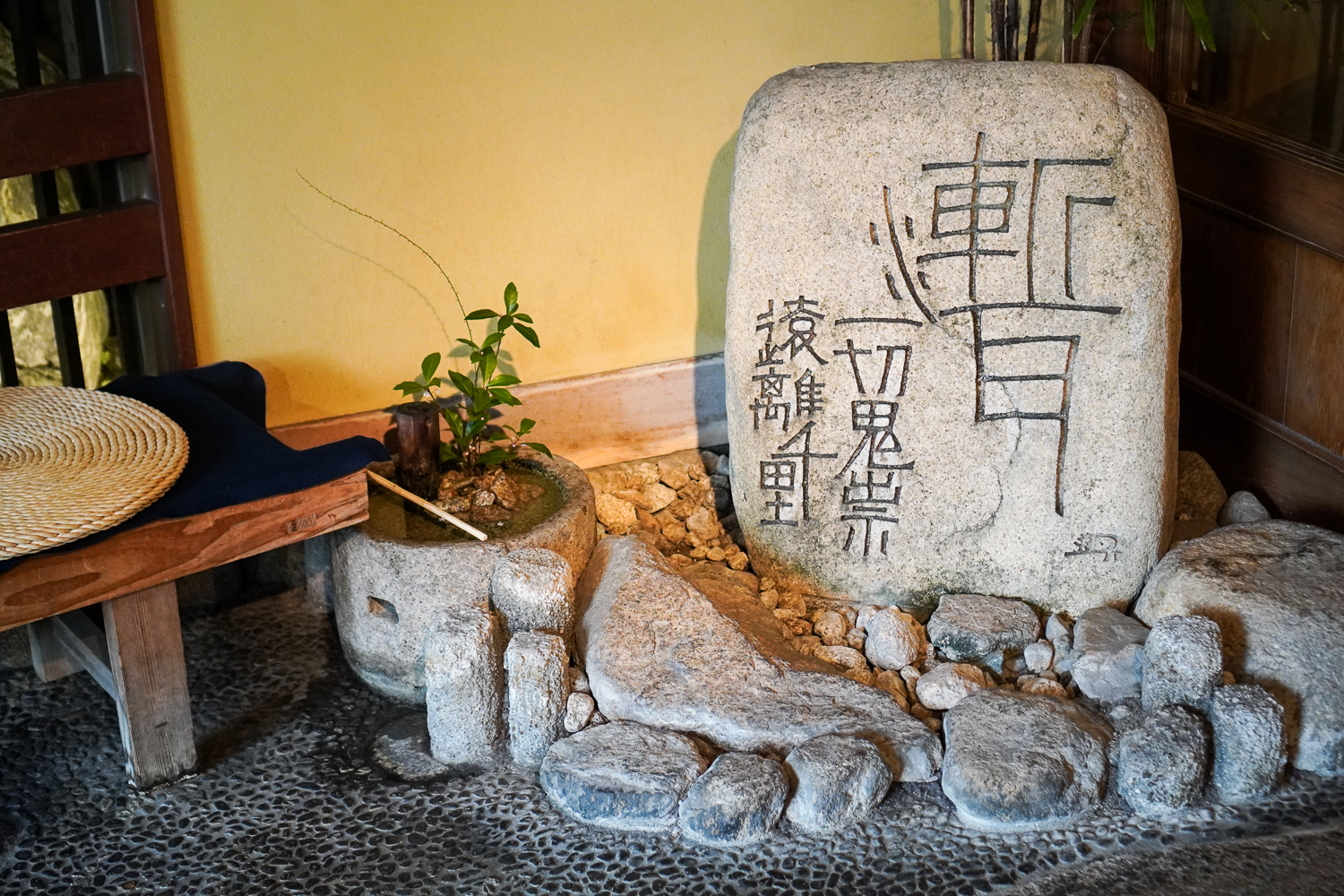 One Nakai-san, ryokan employee, took my bag, another escorted me to the salon for a cup of coffee, the third one took my sandals and gave me slippers. 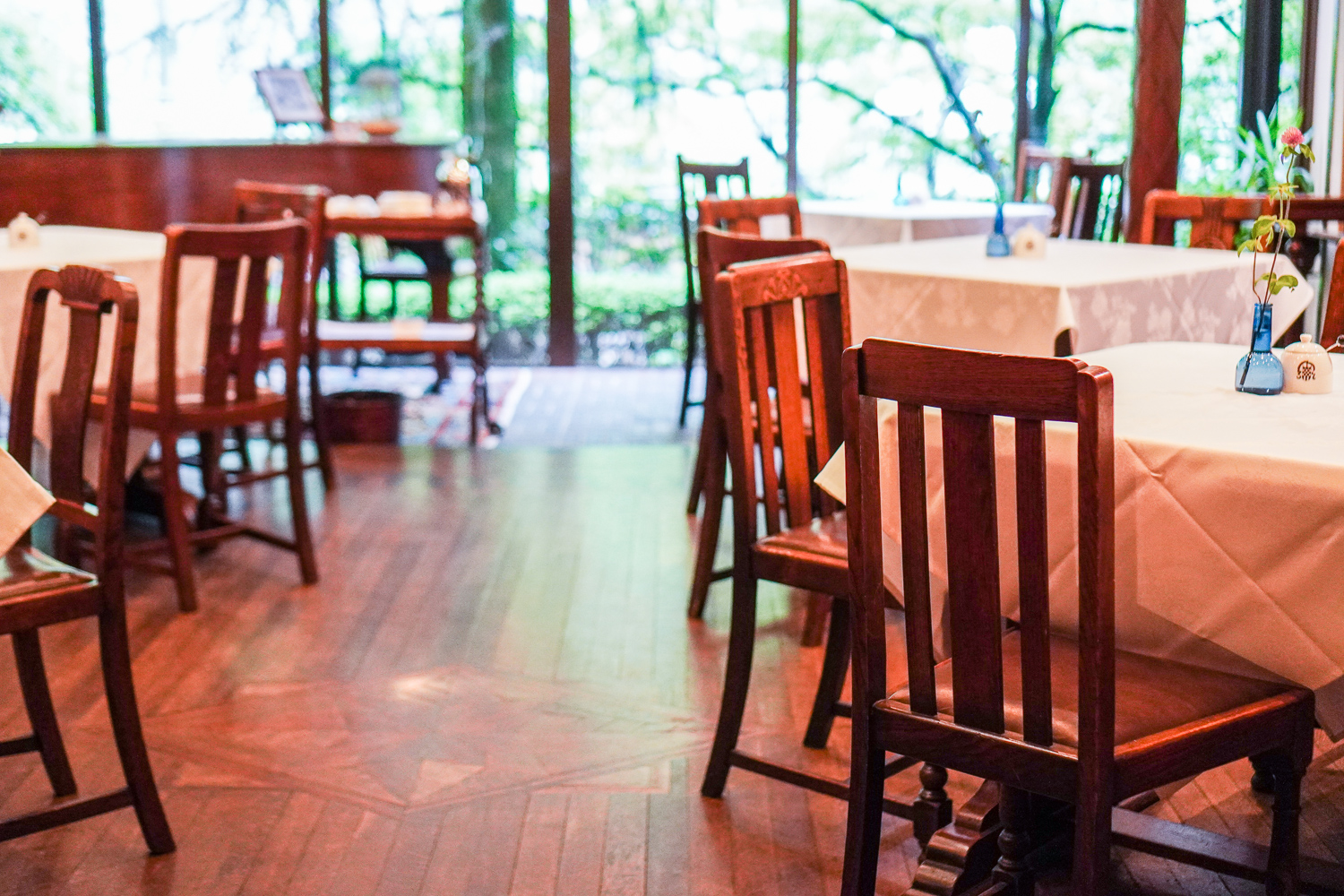 Goshoboh’s main building is from the Meiji period, the 1920s. It’s easy to imagine formal dance parties of that period to the western-styled salon. 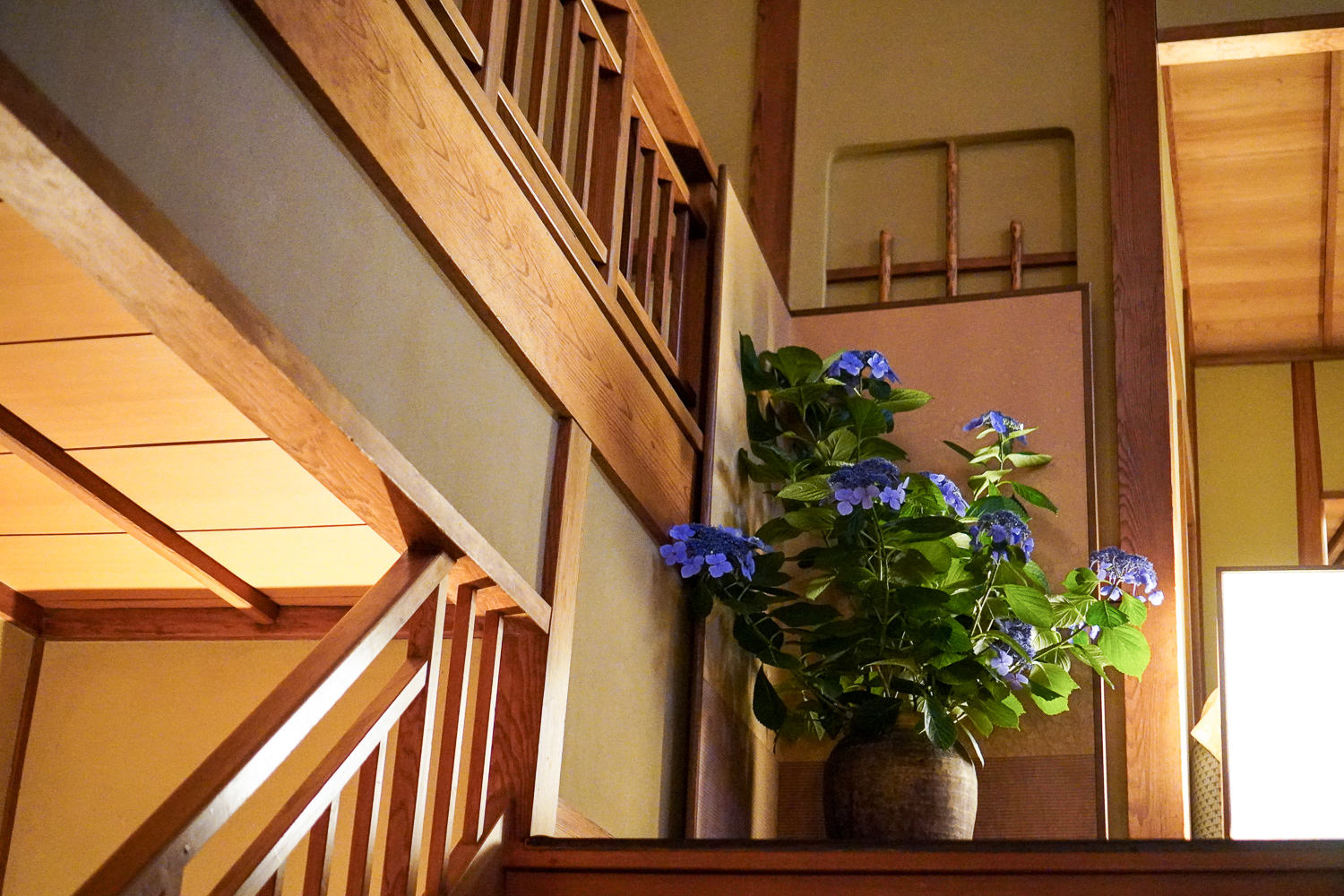 Lovely strolls in atmospheric dimmed corridors in slippers and yukata.

Arima is one of the oldest onsen towns of Japan. It’s the only one mentioned in the first Japanese history books (Kojki, Nihonshoki). Those days Kyoto used to be the center of power and culture. Arima, only three days travel away, was a perfect trip destination. Luckily, nowadays travel is easier – an hour by train or bus.

Arima was famous for the healing power of its onsen water. The samurai came to treat their battle wounds. One empress, who couldn’t get pregnant, came to bath in Arima for two months. A baby boy was born and named Arima after those healing waters.

In 1868 the port of Kobe opened for foreign trade. Unlike in other Japanese ports like Yokohama, in Kobe the area for foreigners was bigger and included also the town of Arima. Many Europeans felt in love with Arima so much that some even bought second homes in the area. 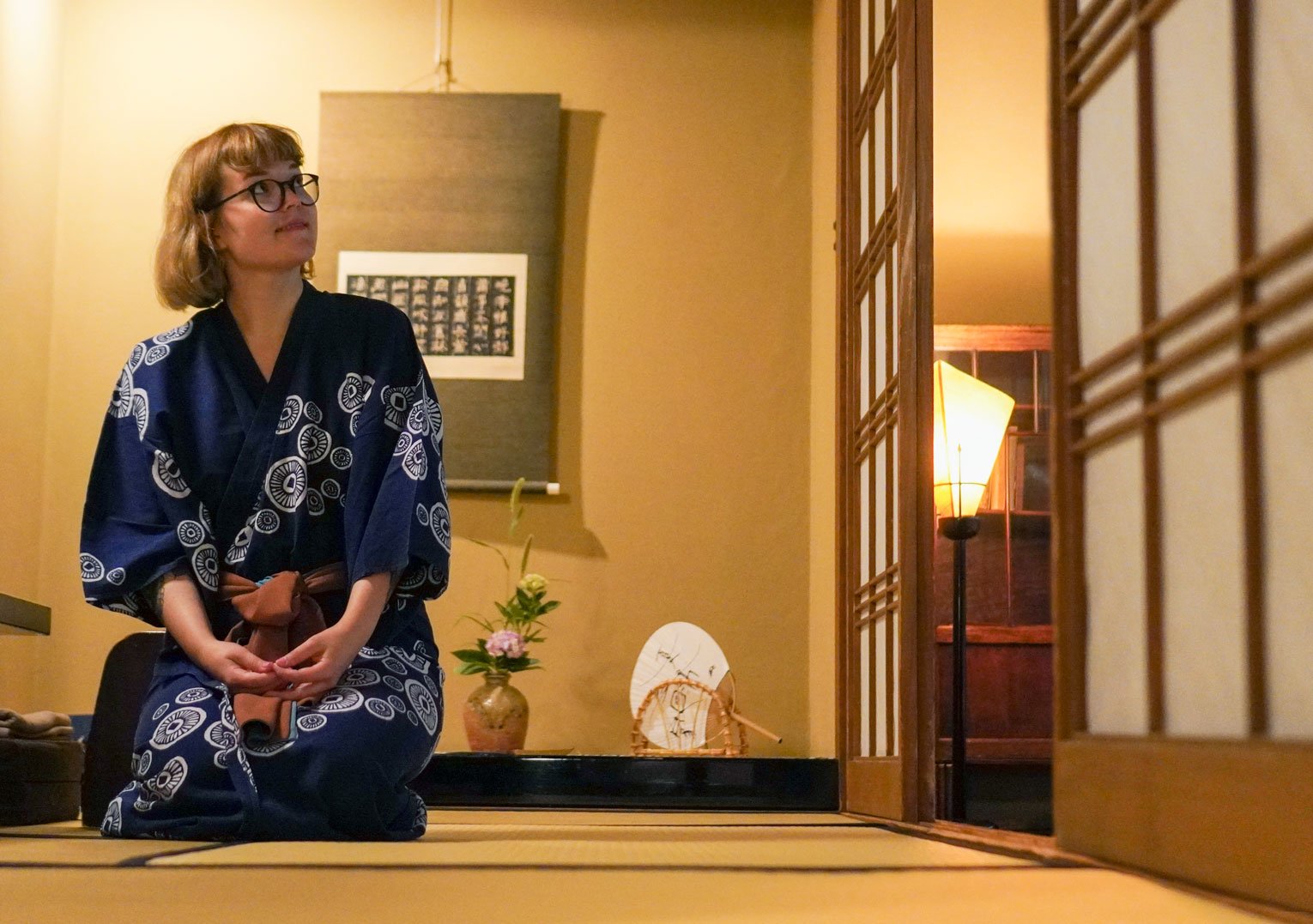 Goshoboh is the oldest ryokan in Arima, the first mentions date back to 1191. 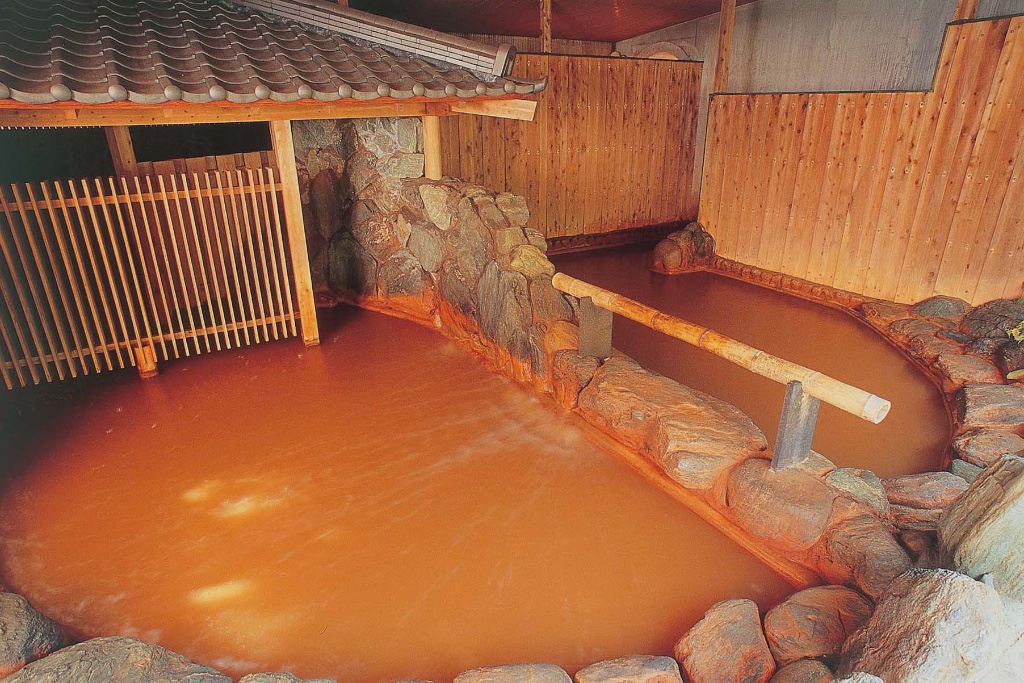 Photo from here, because the spa area doesn’t allow photography. Technically Arima’s bath is a mixed bath between men and women, but there’s a stone wall to give privacy.

Worries are left behind when you change your regular clothes to a soft yukata. Then it’s time for a bath.

Usually, the onsen water in Japan is warmed up by volcanos. Arima’s onsen water is unique in that sense because there are no volcanos nearby. Water is from an ancient sea and trapped between tetanic plates 16 million years ago. It’s enriched by the minerals of the soil and is especially rich in iron and salt.

And if you’re concerned about Goshoboh’s tattoo policy, they claim to be flexible. ”As long as they don’t scare other customers away”, is the answer. So foreigners with small amounts of ink are fine.

In the shower area, I place a small washing towel carefully on top of my bigger tattoo. I wash and shower thoroughly and slowly drop into the 40-42°c heat of the onsen. For a Finn like me, it resembles going to a sauna. But the feeling is much more intensive and the cool breeze calms the face. I get used to the warmth and listen to the sound of raindrops falling into the garden. I take a few deep breaths. Salty water smells a bit like the soil.

Afterward, I feel excellent, newborn. Even though it’s not allowed to touch onsen water with your hair, the steam makes my hair smoother than ever. 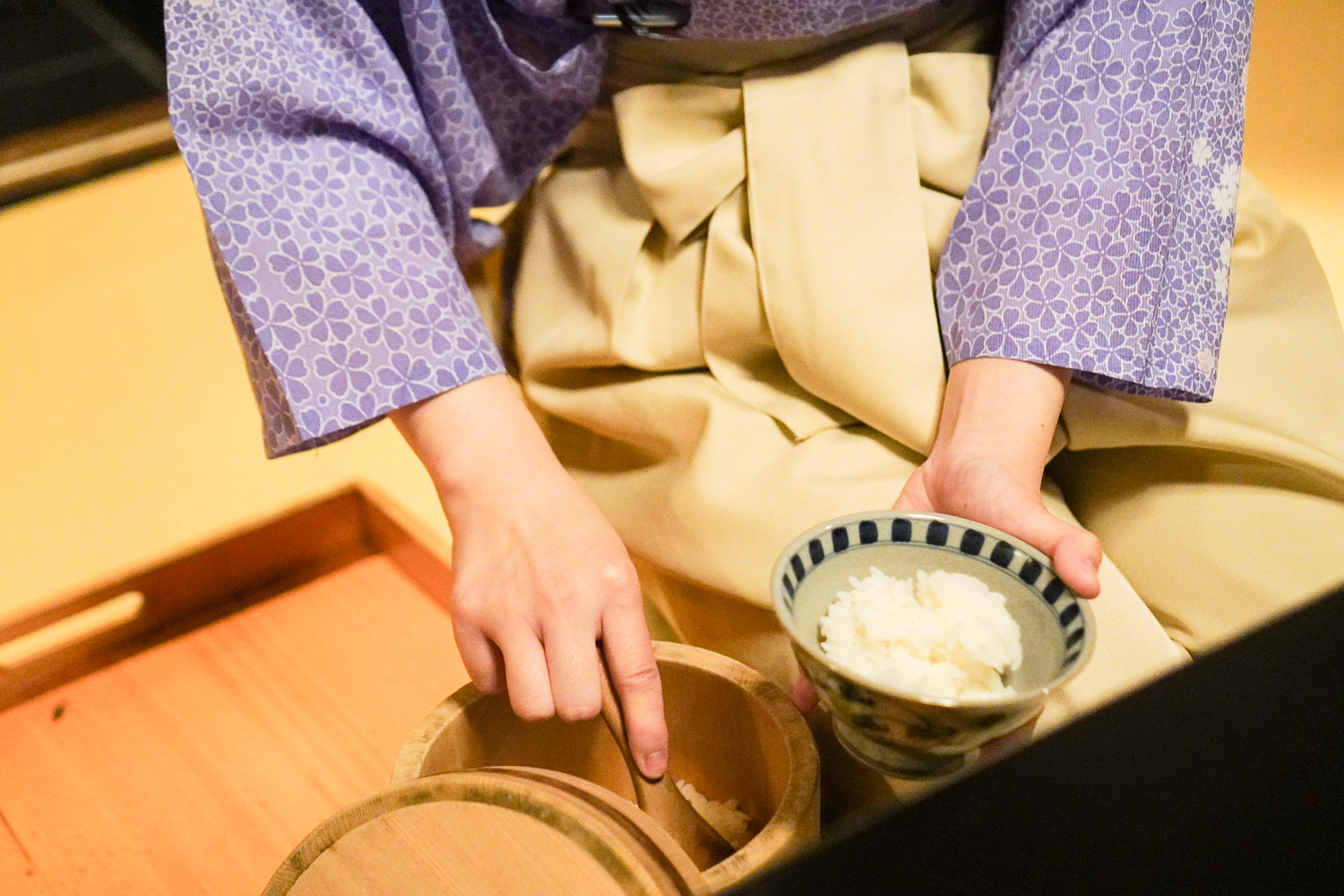 Traditionally in ryokans dinner and breakfast are served to your room. 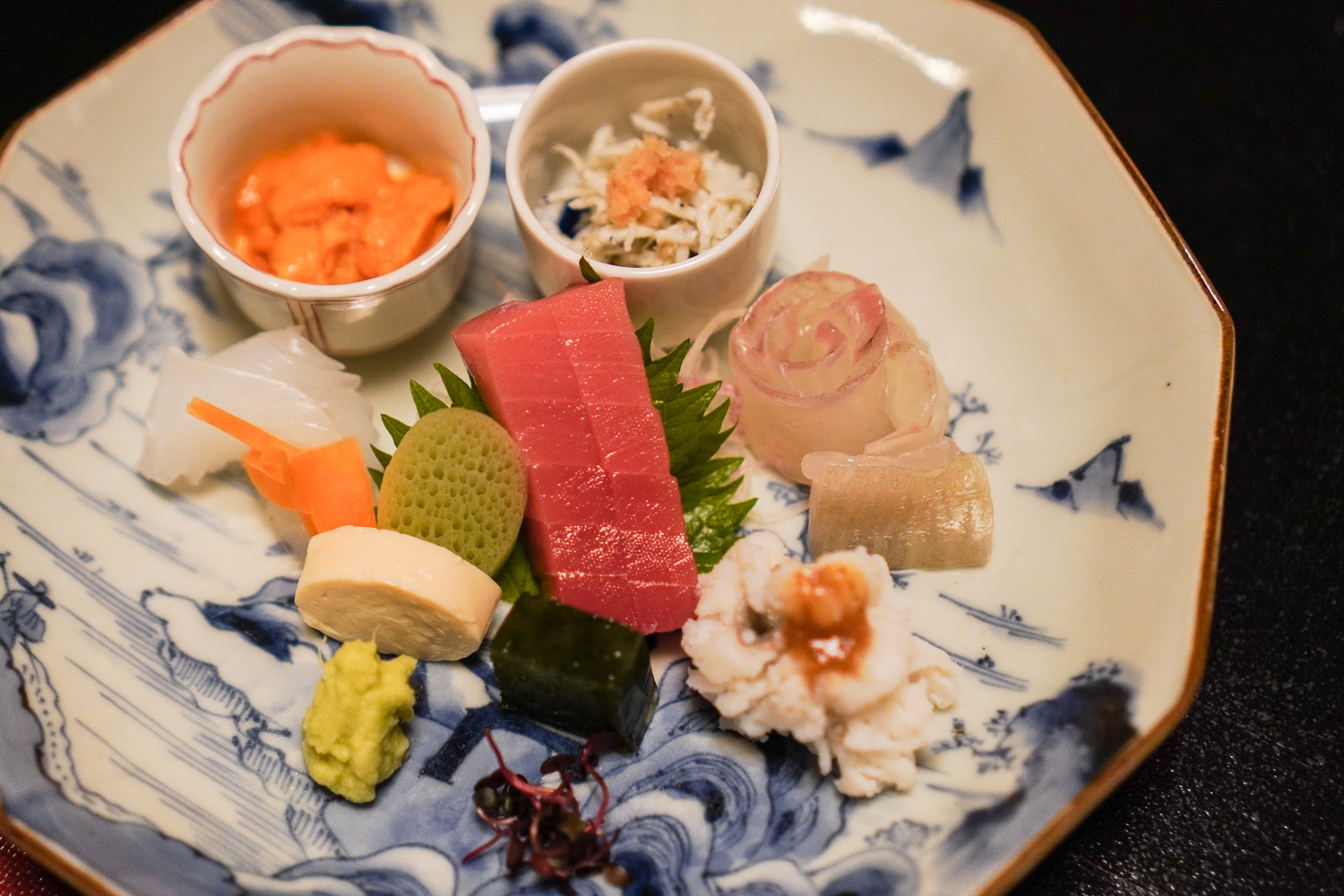 One of the best sashimis of my life. Even the carrots were cut to the shape of crones!

Goshoboh serves kaiseki, the Japanese form of haute cuisine, mixed with polished rustic Yamagata-style. The seafood comes from Japan’s inner sea, Seto. Beef is waguy from Tajima and famous Kobe beef. Special diets, like my pesco-vegetarianism, are no problem at all.

In Goshoboh, dinners are usually eaten socially at the restaurant, where you can admire chefs doing their trade. At an extra cost, it’s also possible to eat dinner at the privacy of your own room, which is what I did on my first night. Ryokan employee, nakai-san, placed carefully each plate in front of me and left the room, leaving me to dine at peace.

The dinner was a culinary trip of eight courses. First arrived sashimi, tasting plate with small treats and home-made tofu. It was followed by a few different fish courses and traditional Japanese tempura. But contrary to traditional shrimps and vegetables, there was cheese and fresh figs. What a delicious experience with a hint of matcha salt! 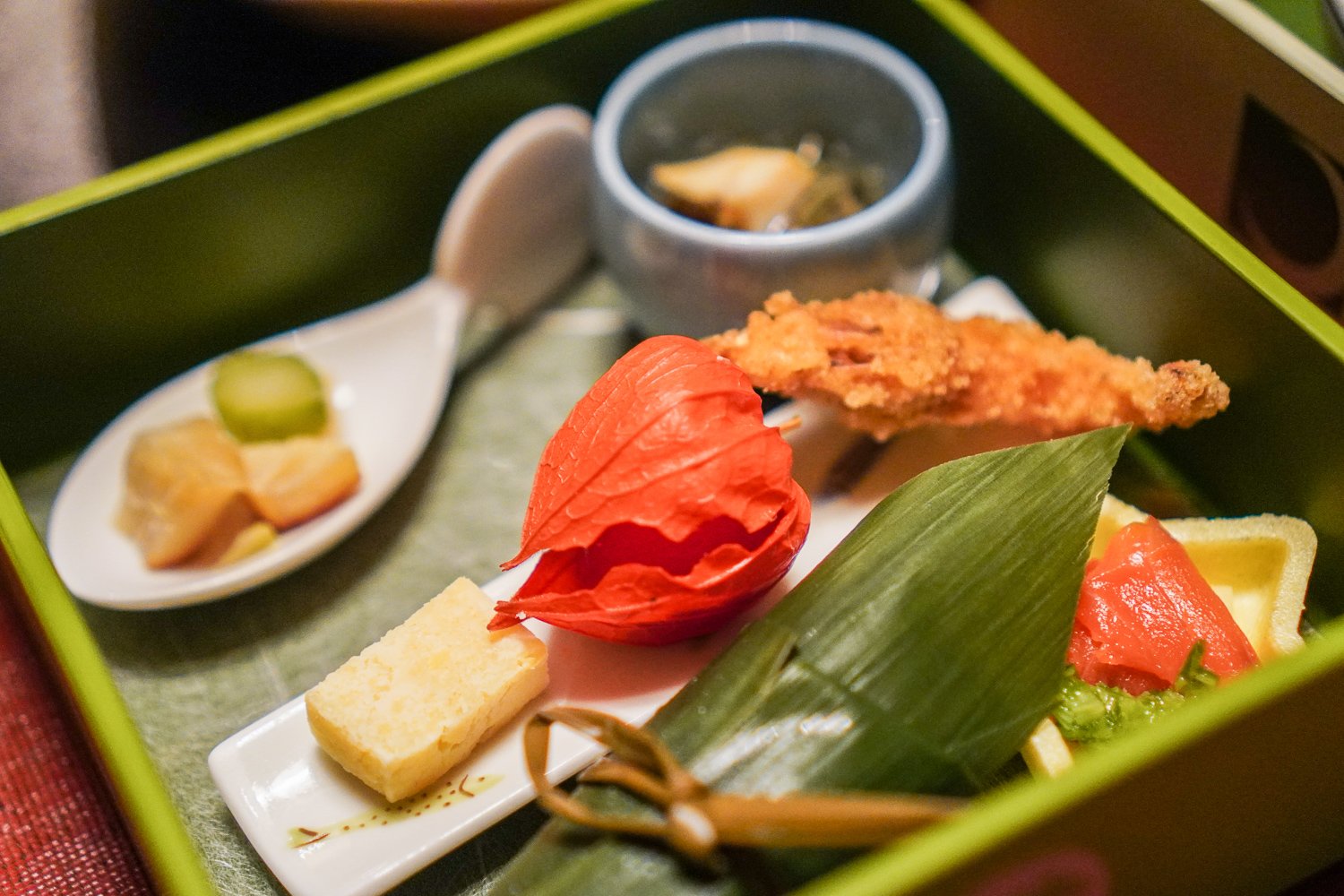 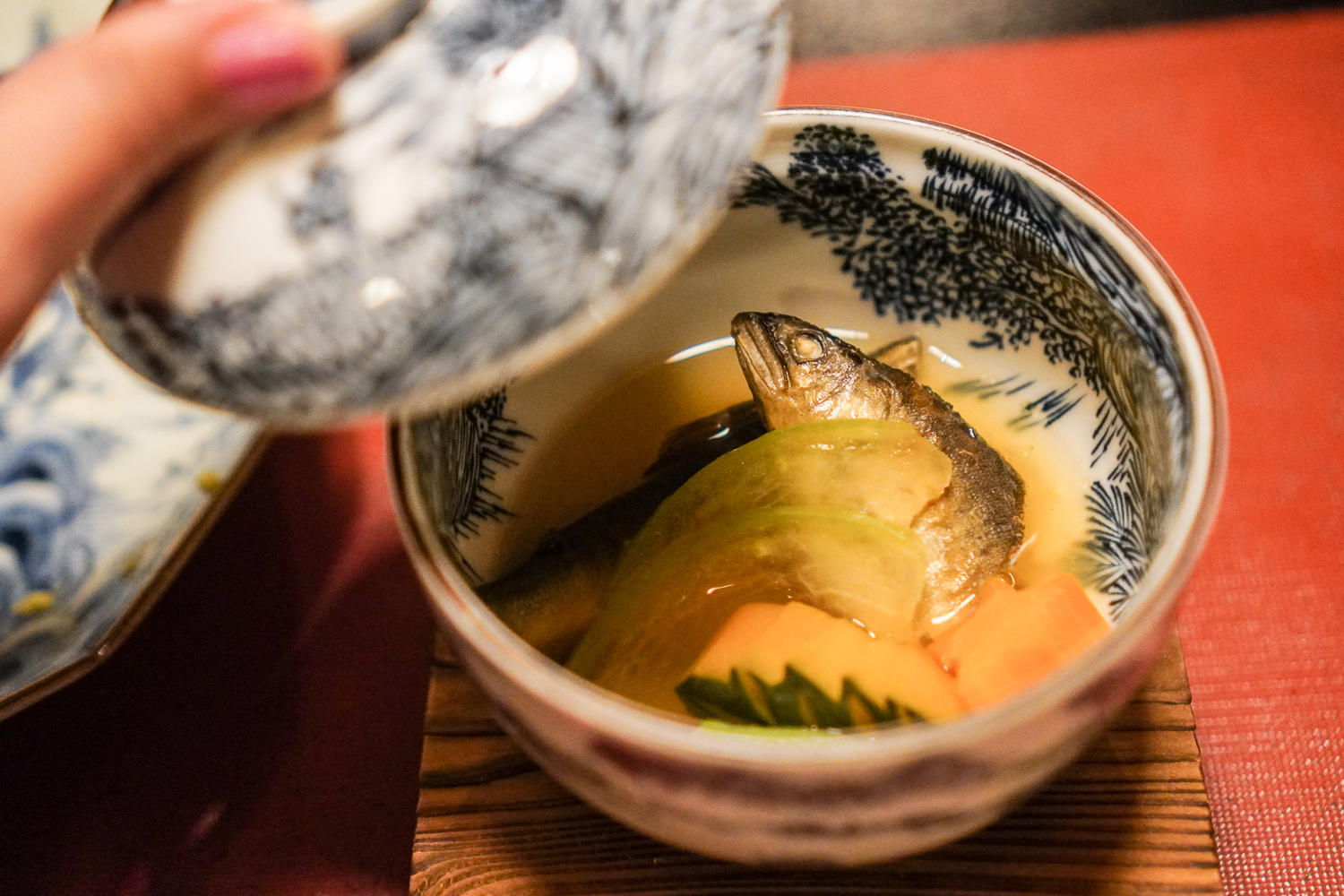 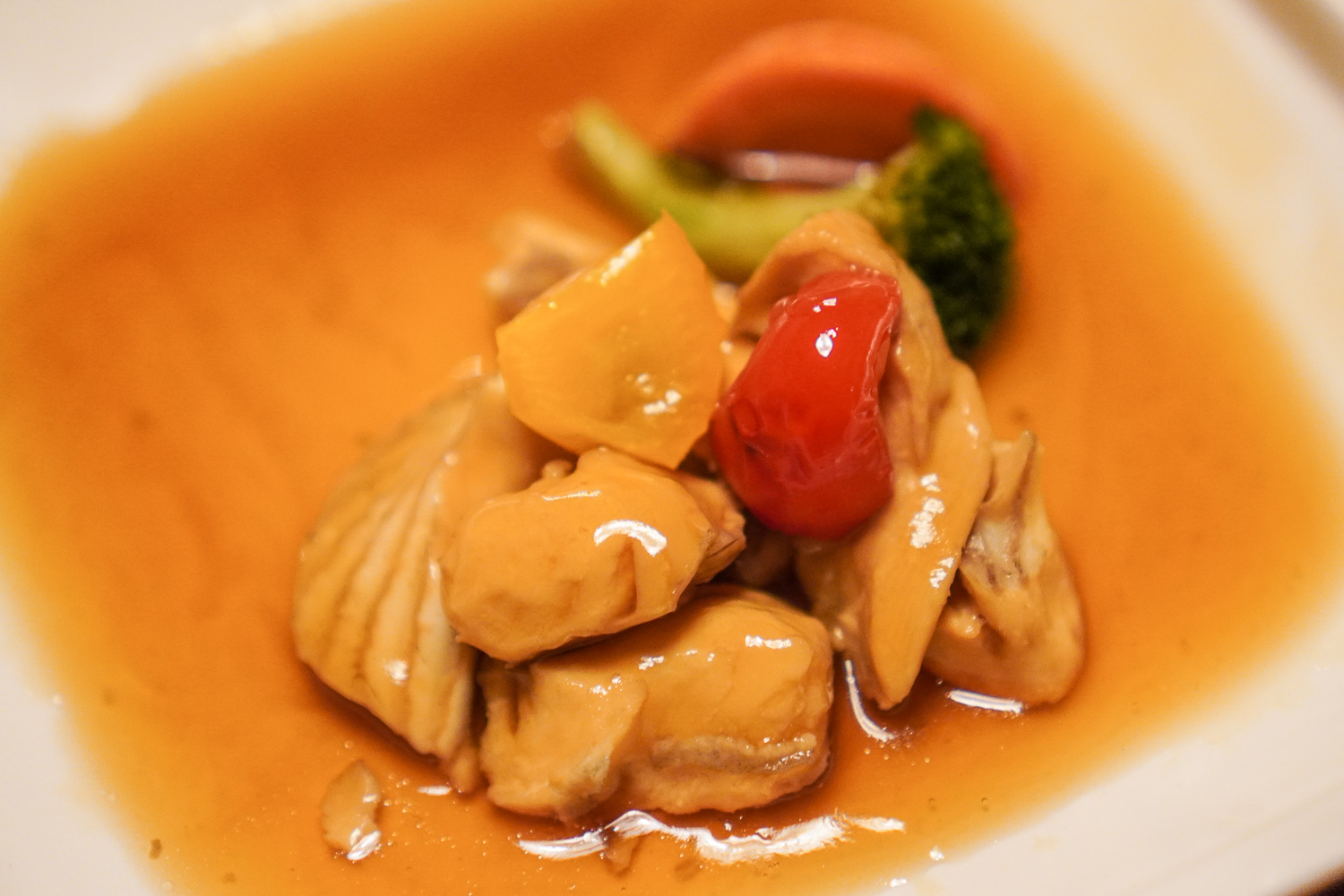 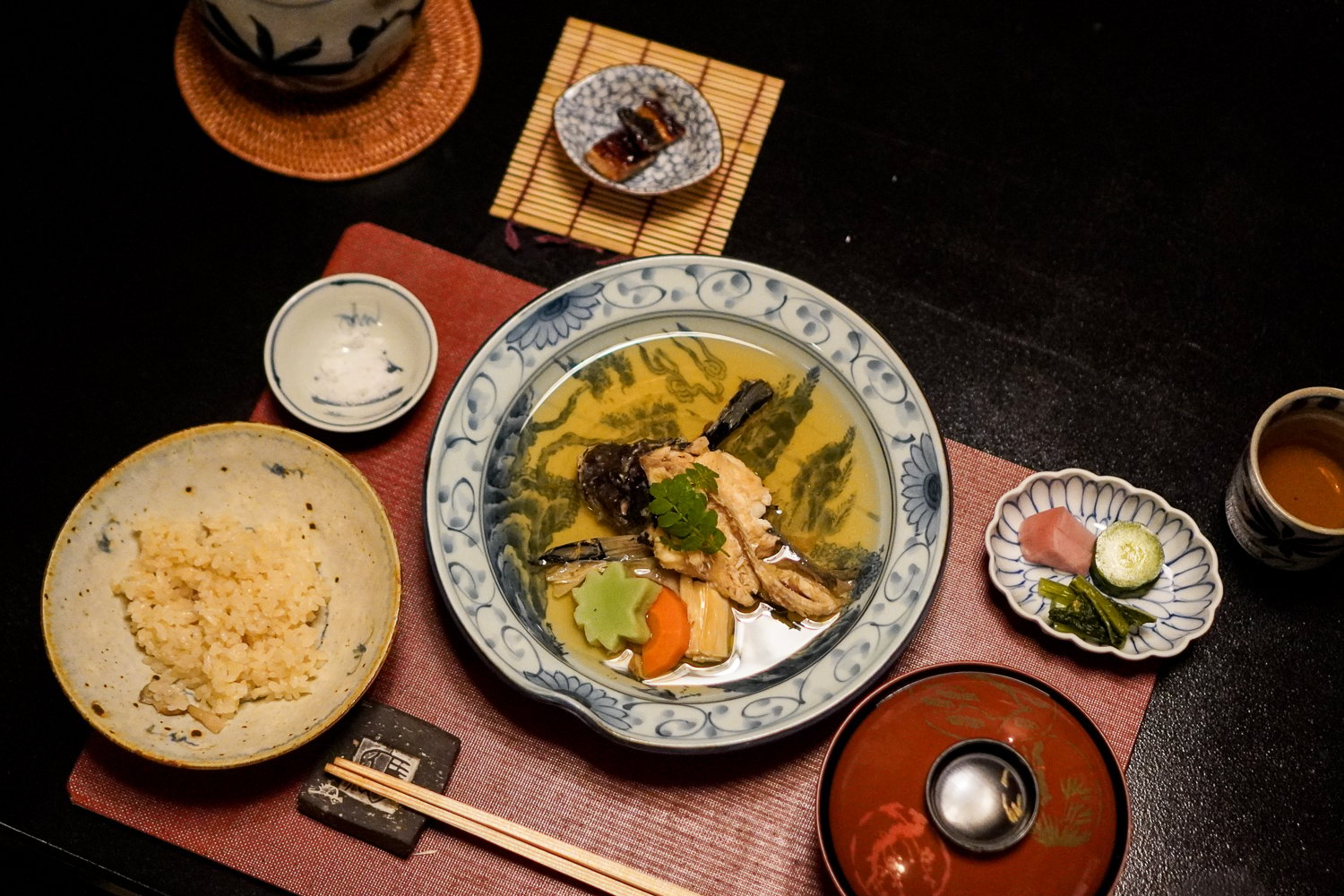 Ryokan meals won’t leave you hungry. When the main course came, I didn’t have any hunger left, but the food was so good I had to keep eating. 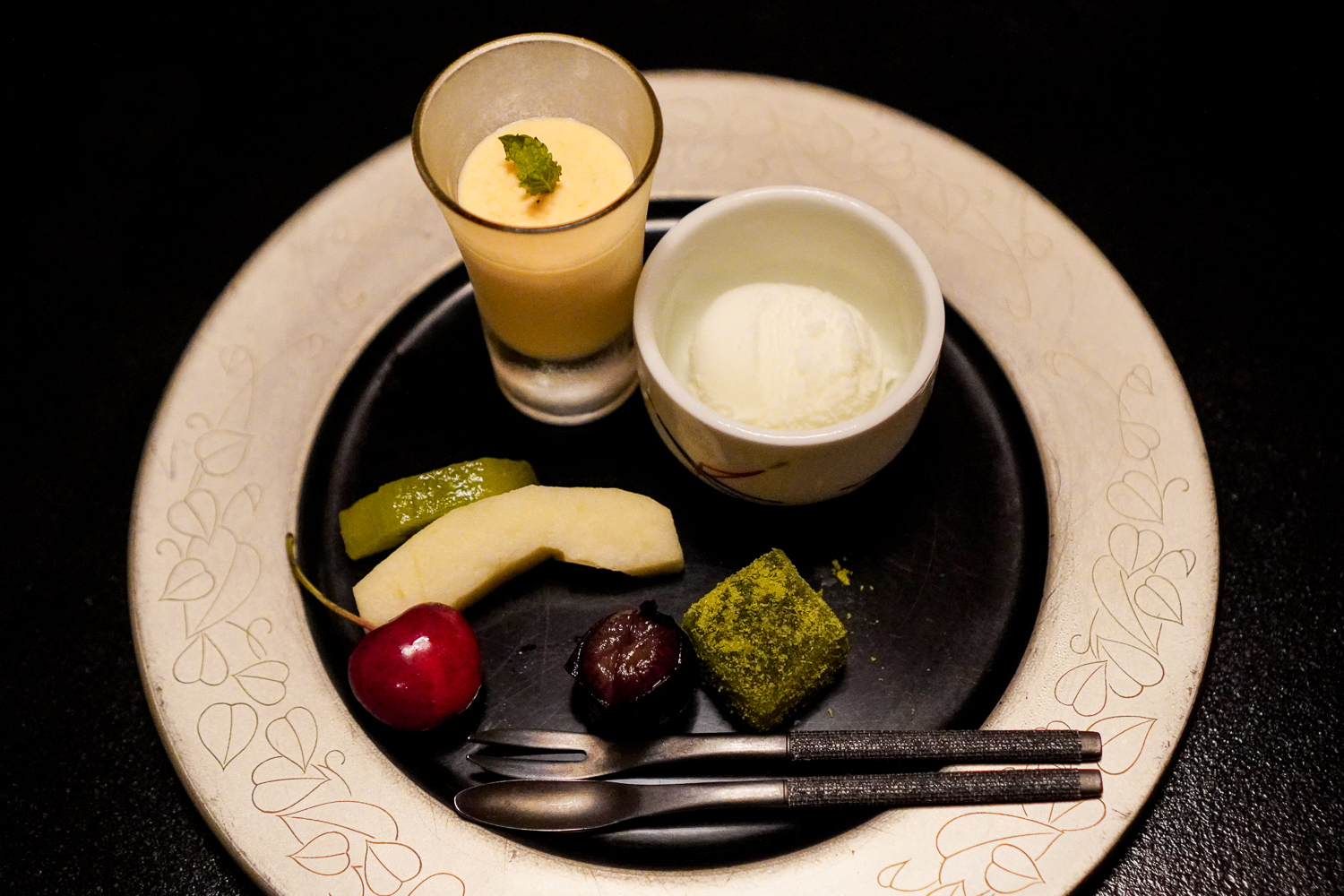 Japanese dessert at traditional form: fruits and wagashi-sweet, paired with carrot mousse and sorbet. Hospitality can be seen in the smallest details: how the grape is opened artistically and the seed is removed, just for you. 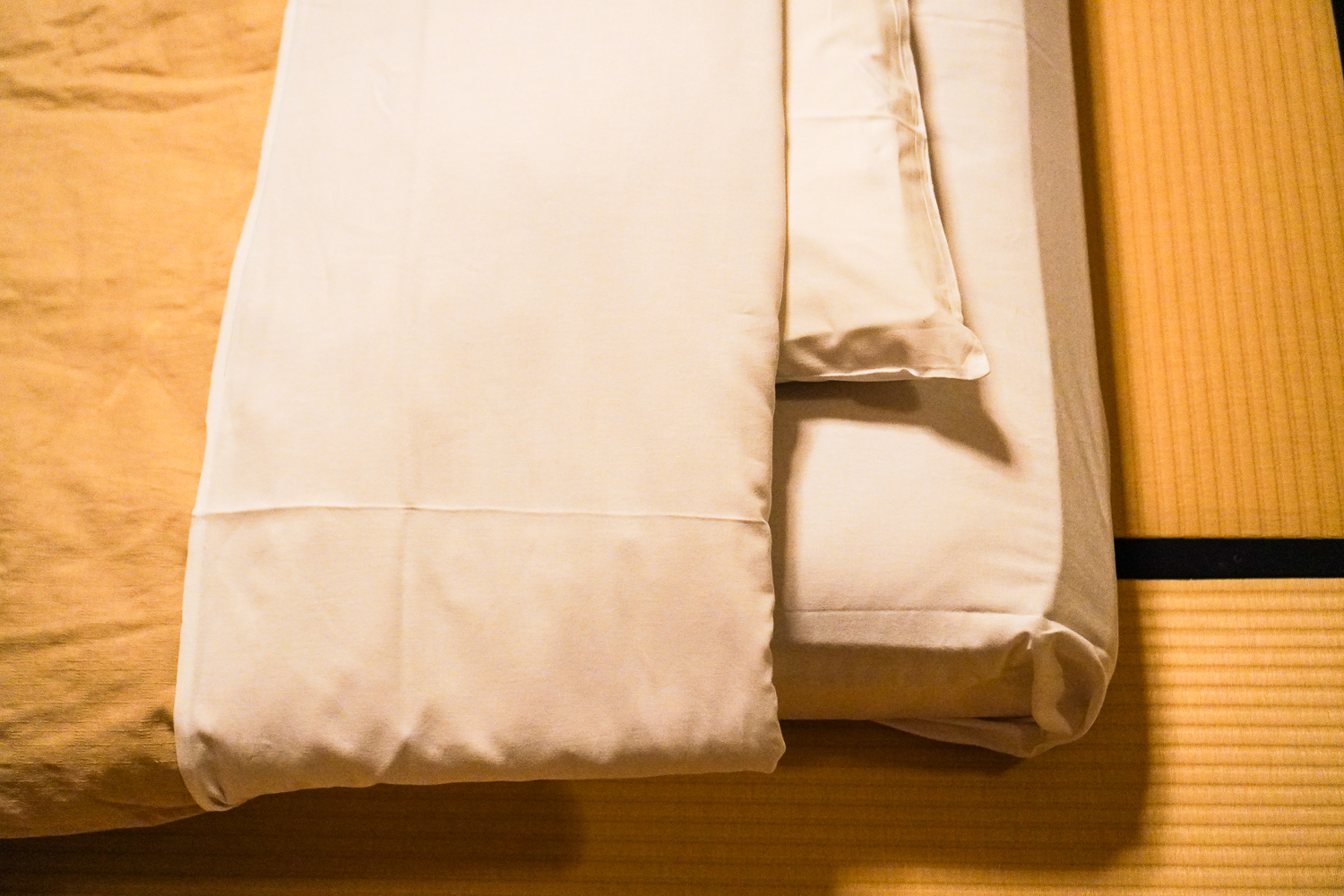 After dinner the bed was made, my eyelids become heavy. I grabbed my book but felt asleep fast. In the morning, two Nakai-sans came with a fresh-squeezed glass of orange juice to put the bed away. The manner was extremely polite and unnoticeable. 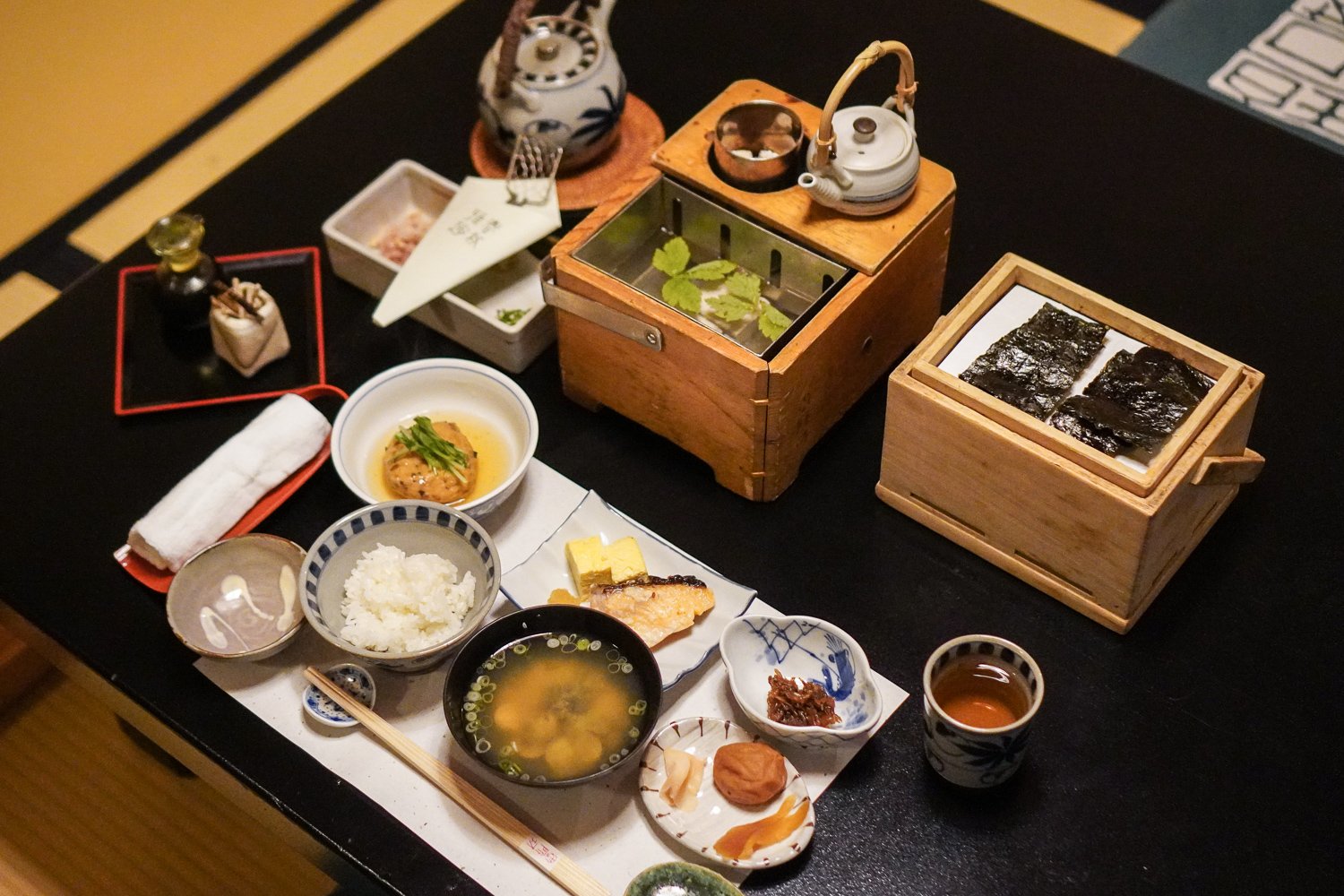 Gorgeous breakfast included everything from salmon to tsukemono and tofu with delicious toppings. One of those was bonito-fish, the hardest fish in the world. It was grated right before my eyes. 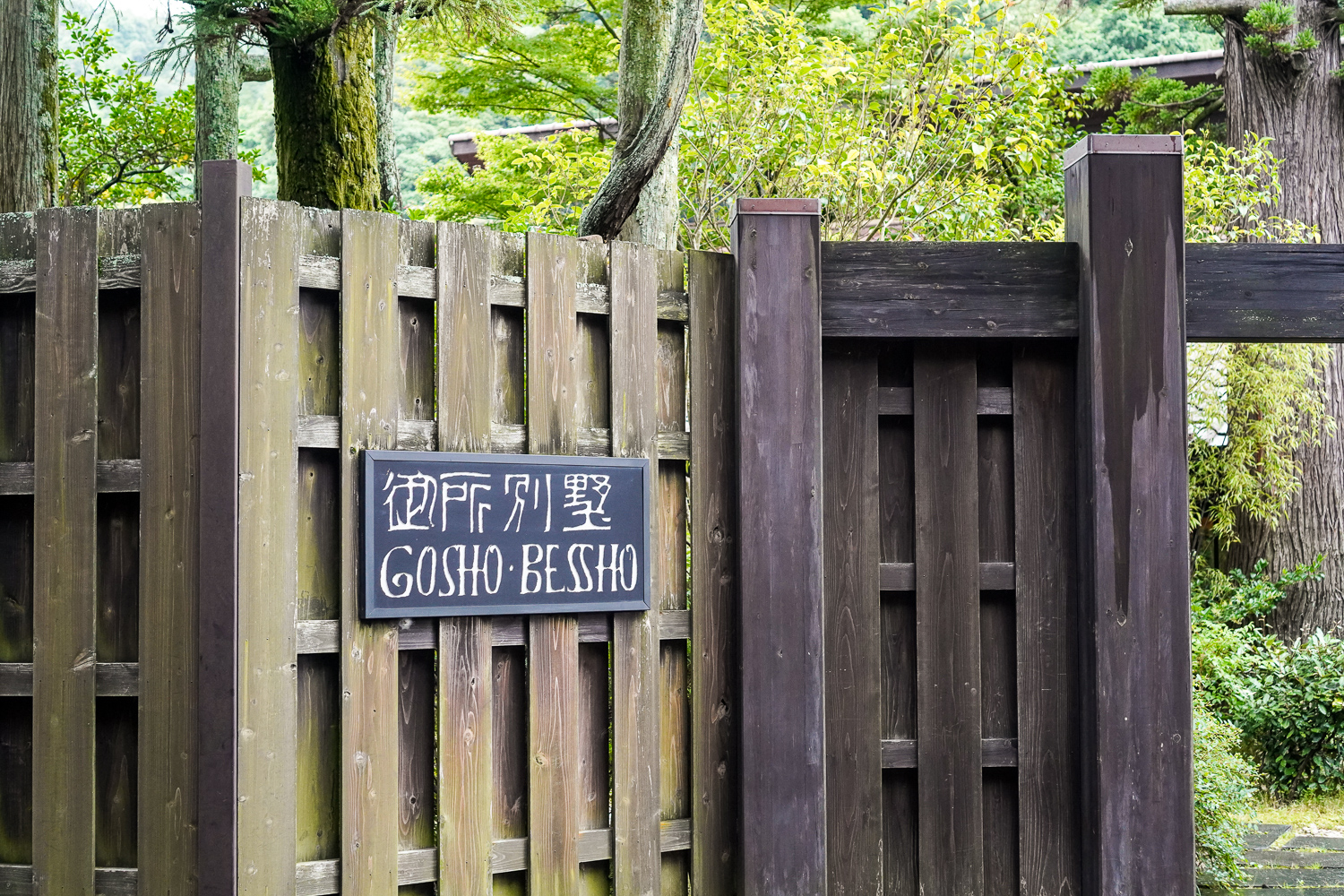 After the huge breakfast of Goshoboh, I strolled trough narrow streets of Arima. In the afternoon I reached Goshoboh’s sister inn: Gosho Bessho.

Compared to Goshoboh, Gosho Bessho’s style is more western with hints of Portugal or Spain. It makes sense because Watanaki Hirosuke, the artist behind Goshobohs logos and artwork, has spent long periods in southern Europe.

The accommodation in Gosho Bessho is in western-styled villas that even have their own low-temperature saunas. The sense of Japan of course lingers. There’s an onsen on the premises and the guests are dressed in yukatas. 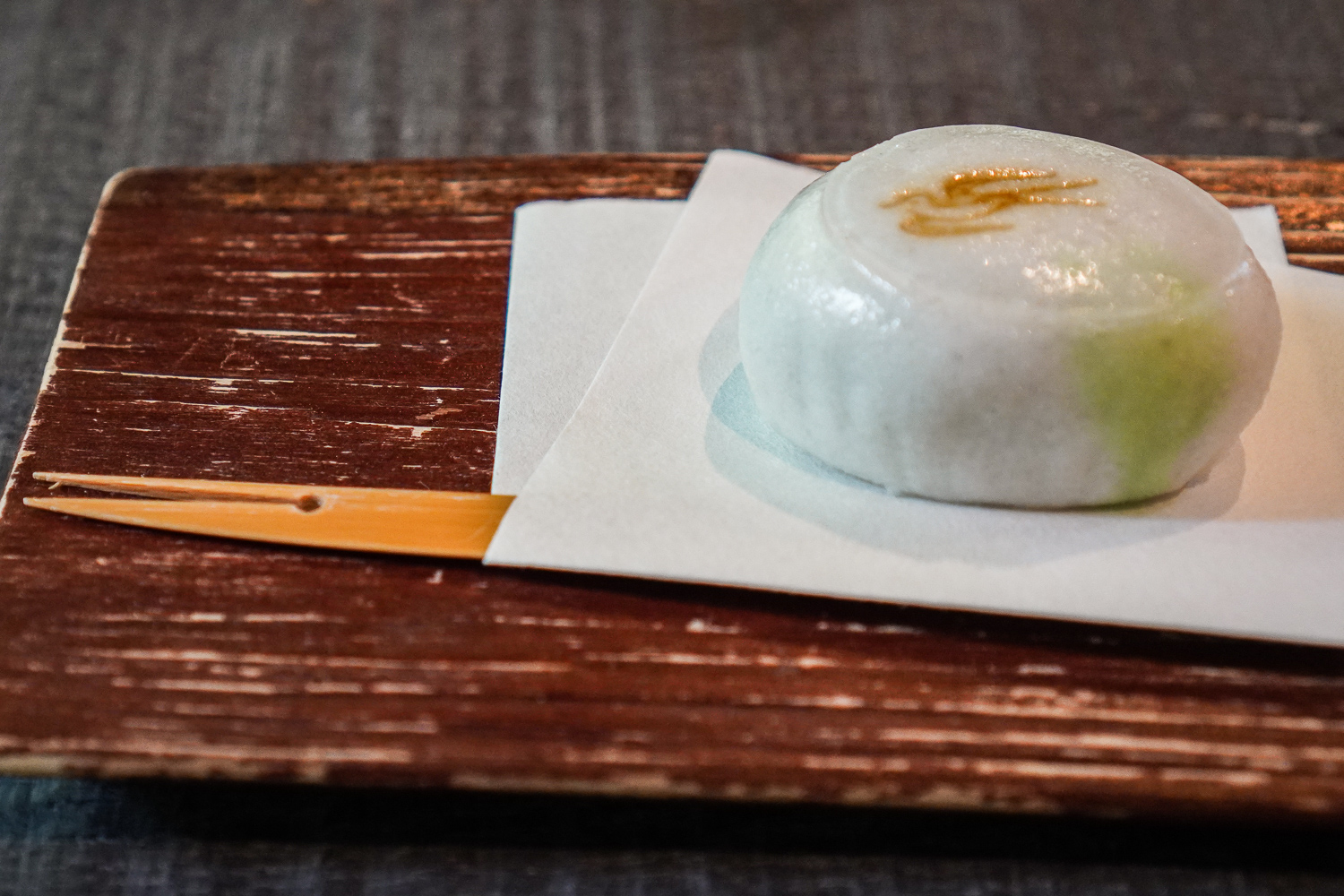 Right after I arrived at Gosho Bessho I was treated with green tea and a traditional sweet. 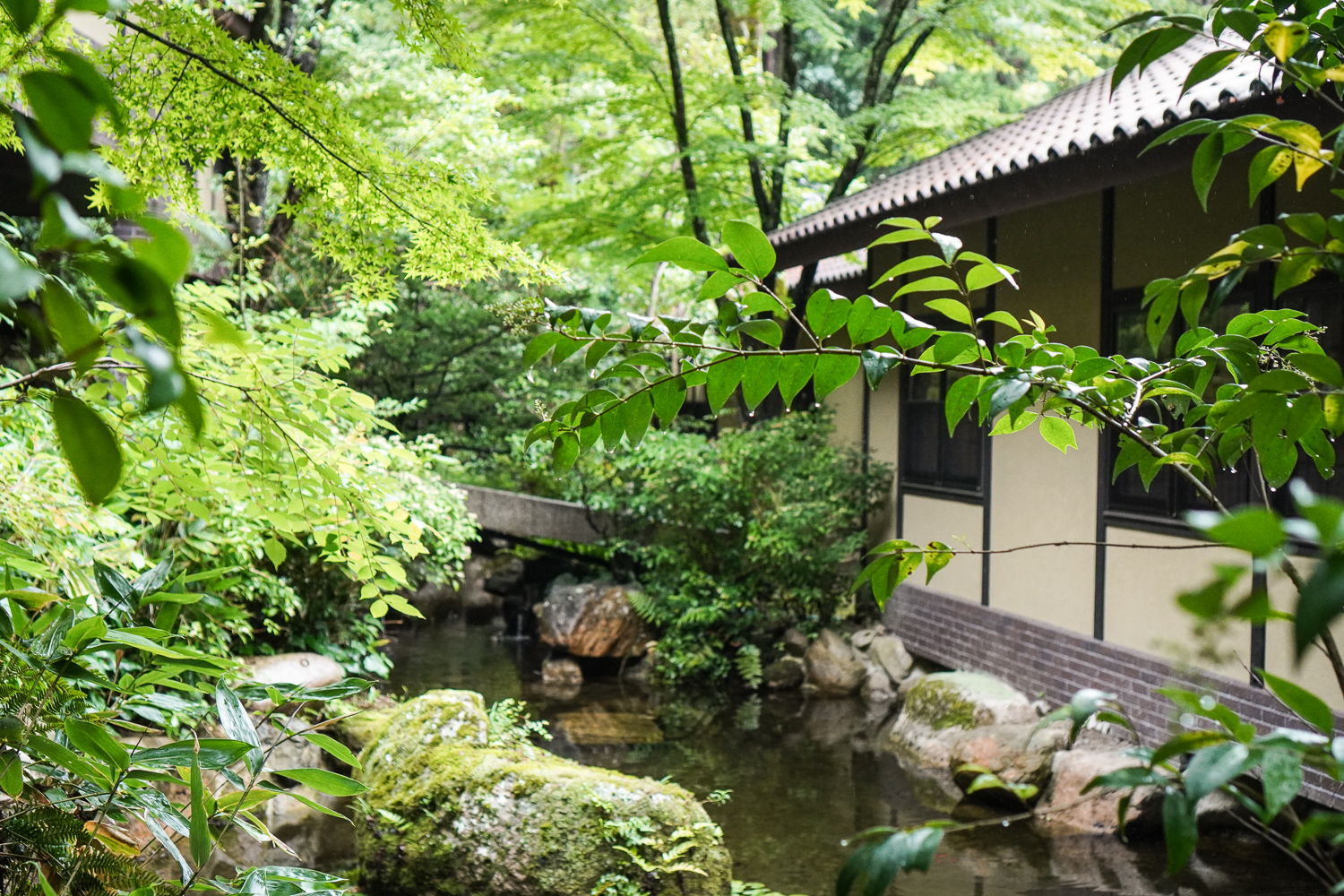 My own villa. I immediately changed into a yukata and paid a visit to Gosho Bessho’s onsen. Unlike the outdoor bath of Goshoboh, Gosho Bessho’s bath was located indoors. Luckily, it didn’t make it any less relaxing. 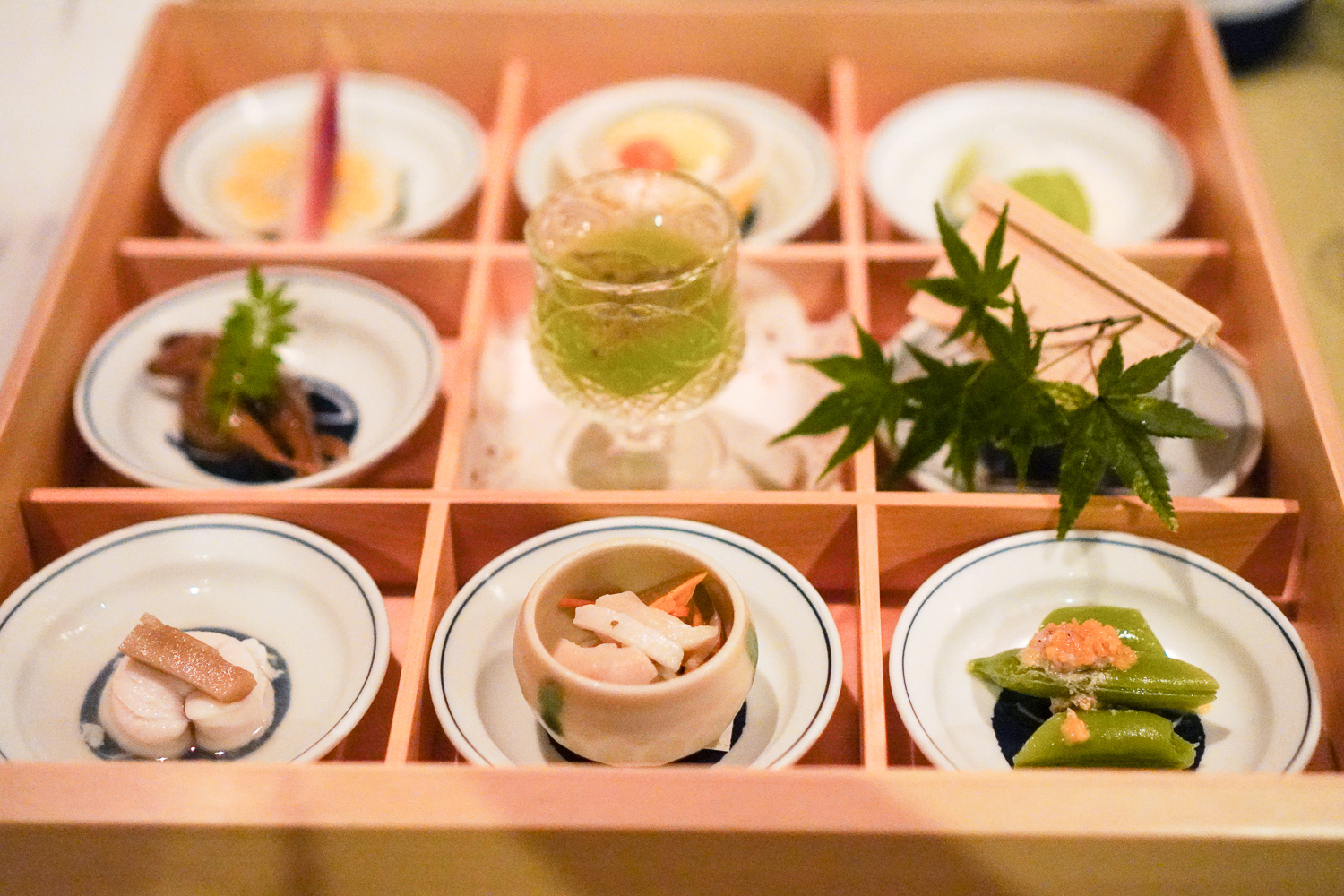 The cuisine of Gosho Bessho

Whereas Goshoboh’s food was traditional Japanese kitchen, western influence can be seen in Gosho Bessho’s cuisine. Actually many of the chefs have a background of working in French restaurants.

A tasting plate included vegetables in different forms, azuki-beans, seafood and lotus root. It was followed by roasted tofu, which was delicious with a hint of wasabi and crunchy seaweed. Then came sashimi – just as perfect as yesterday.

The dinner was served in Gosho Bessho’s restaurant, where every seat had a view of the surrounding nature. Japanese guests were sitting there in yukatas, one solo traveler had a book to entertain themselves with. The atmosphere was calm and relaxed. 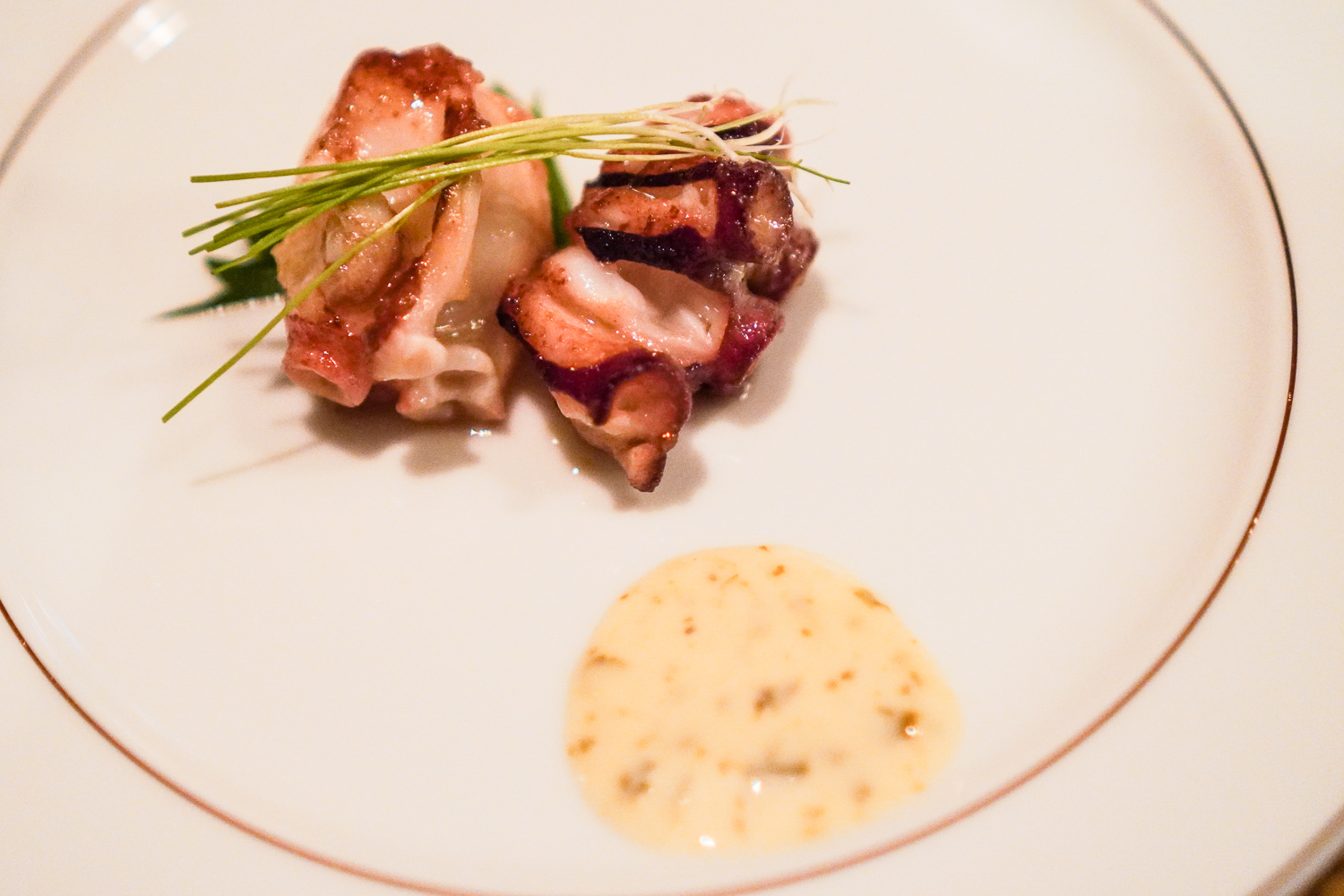 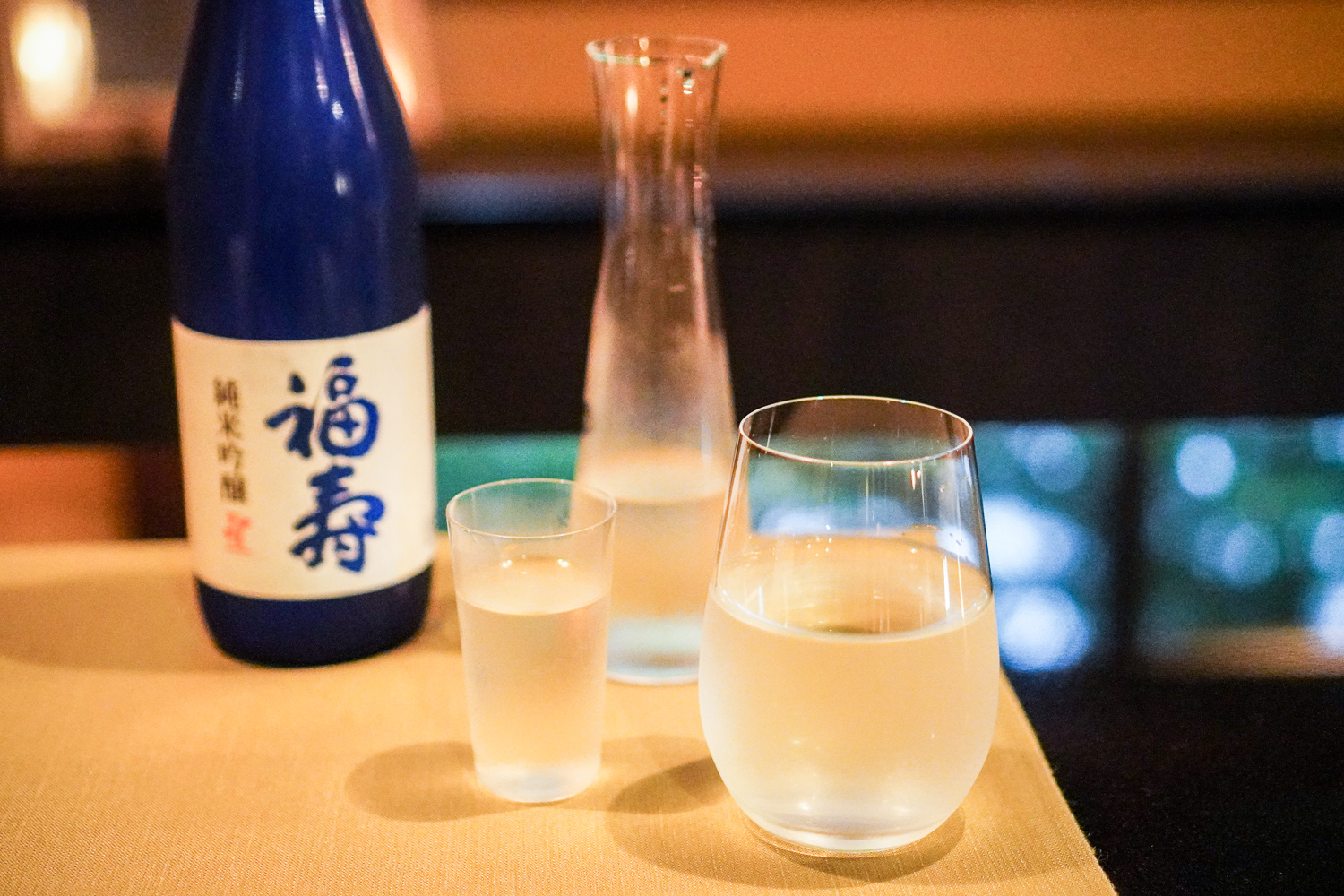 A sip of local sake to accompany the food. 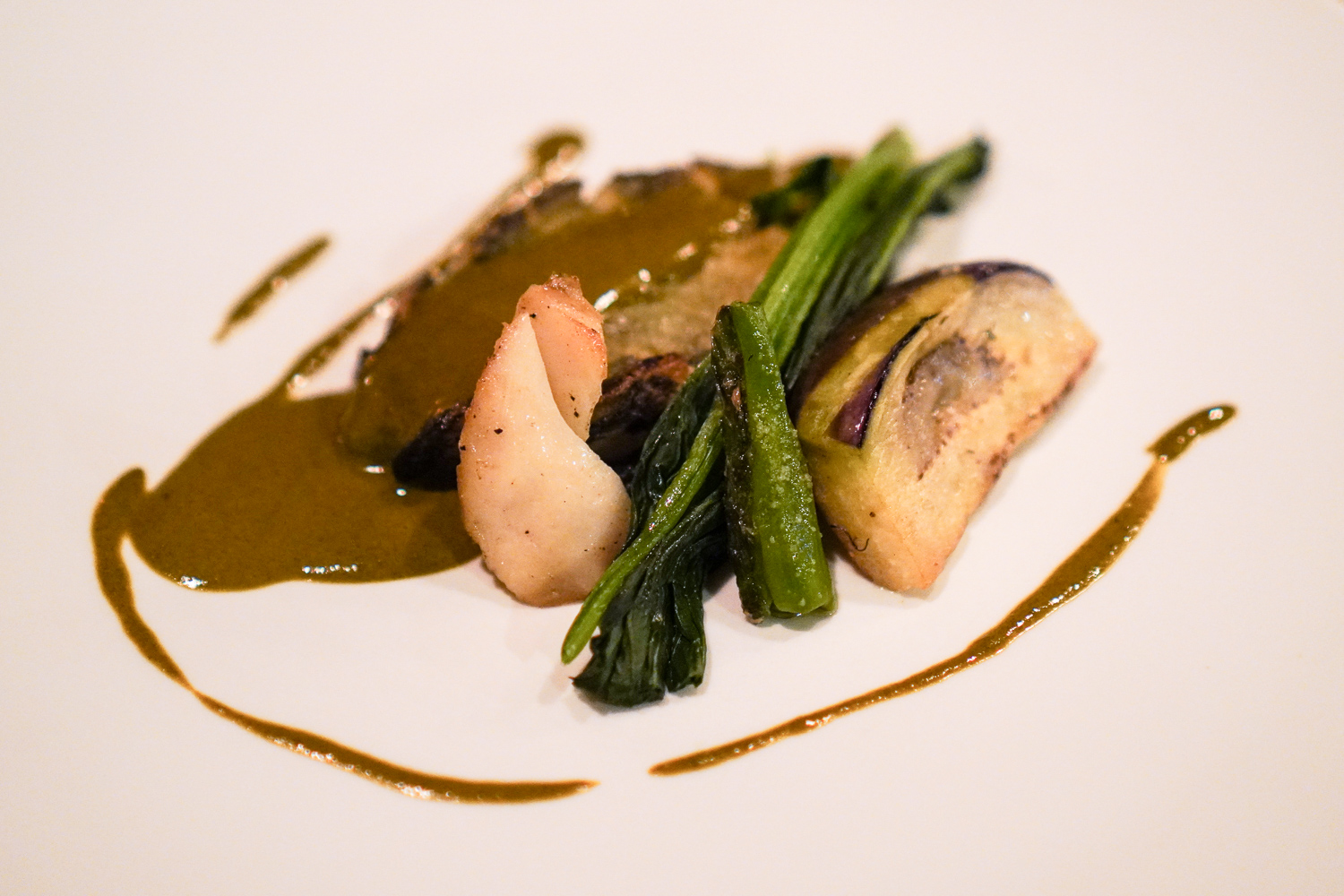 The main dish was abalone with fish liver sauce. Surprise menus are the best – I wouldn’t have dared to order this, but it was so delicious I’m happy I had it! 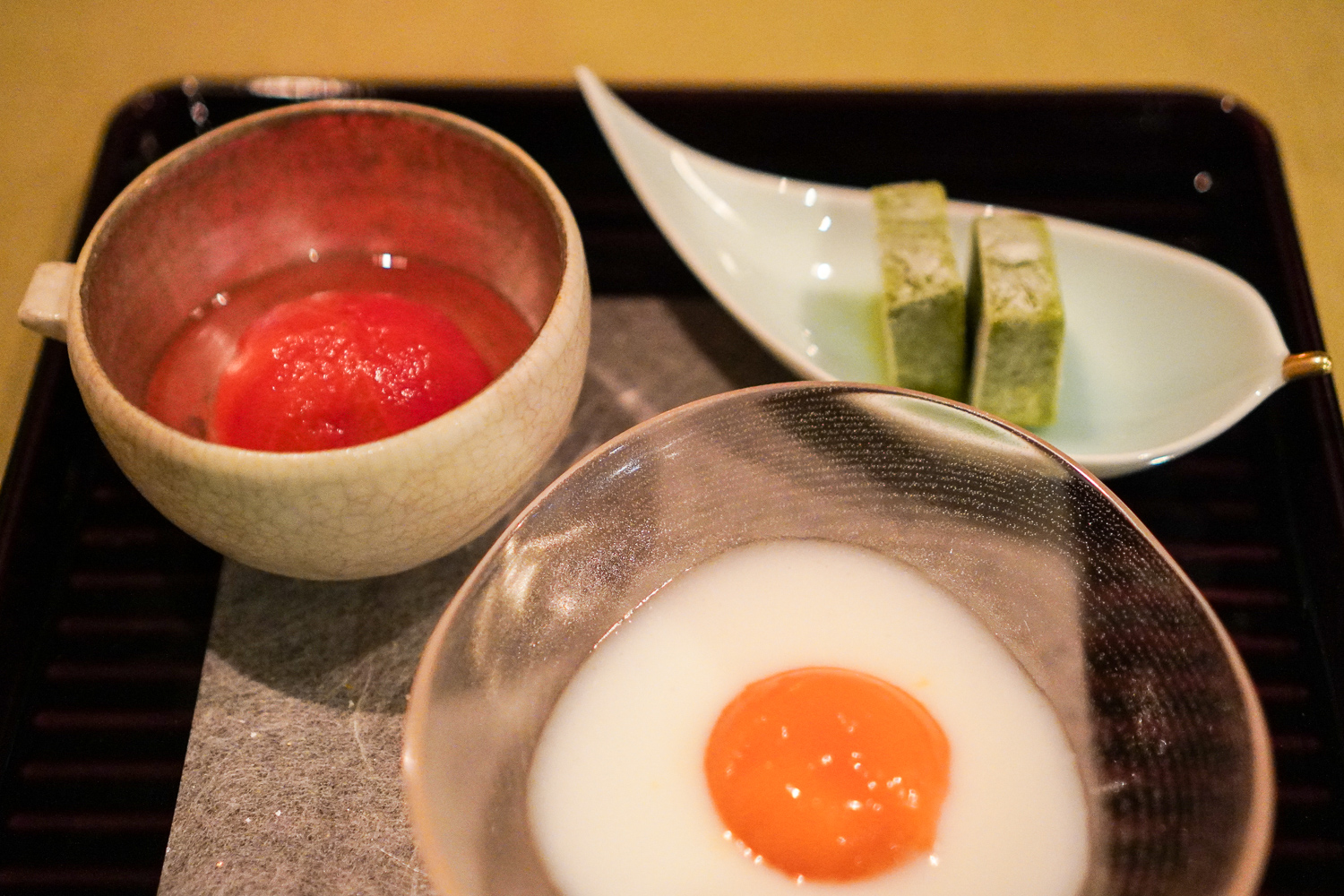 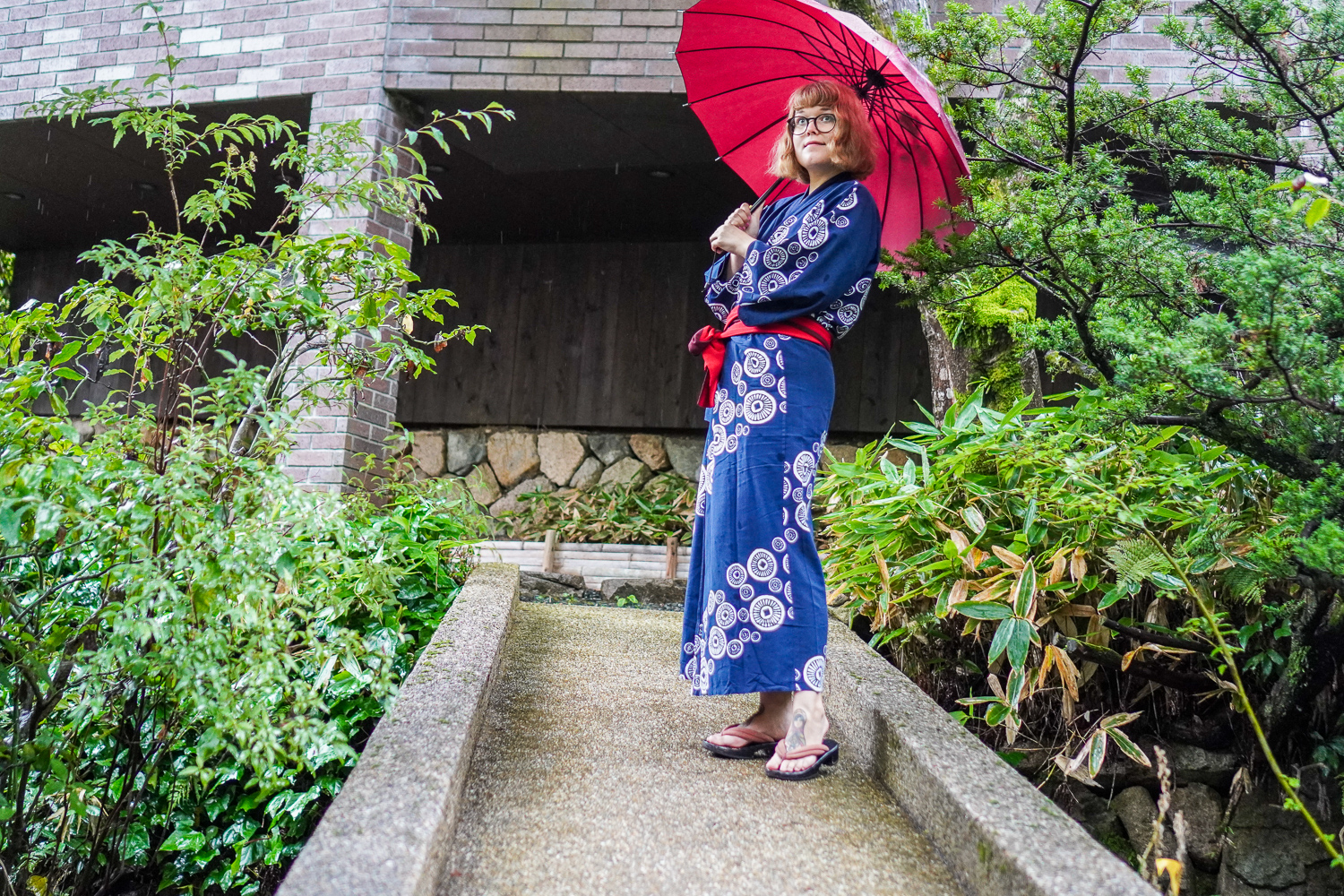 After the dinner, I walked back to my villa, stomach full of food and head filled with thoughts. The biggest difference between hotels and ryokans is that in ryokans you feel like a guest, not a customer. I fell happily asleep on my massive bed, under the heavy blanket. 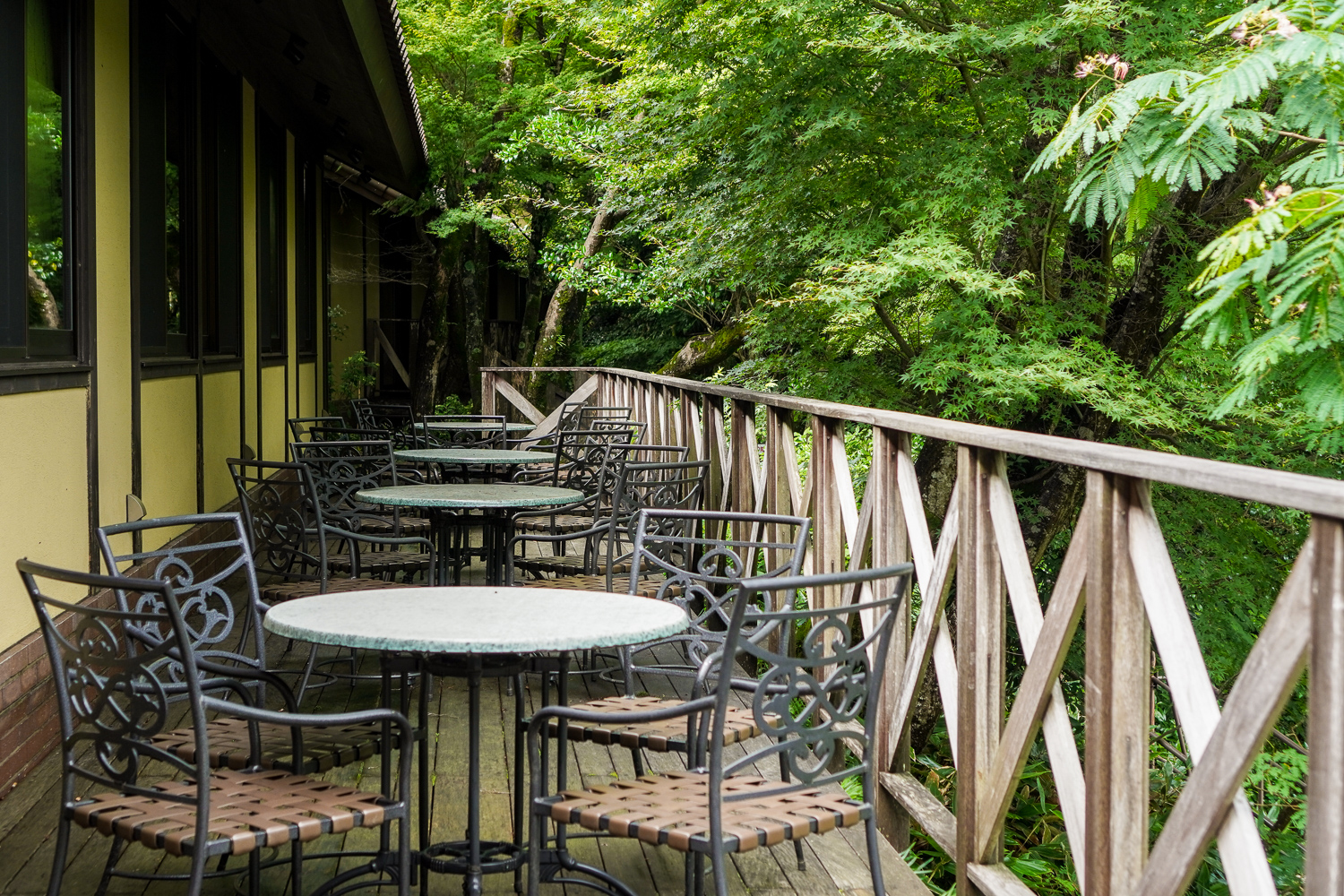 In the morning the rain had stopped. I made myself a cup of coffee and enjoyed a book and nature on the balcony of my villa. 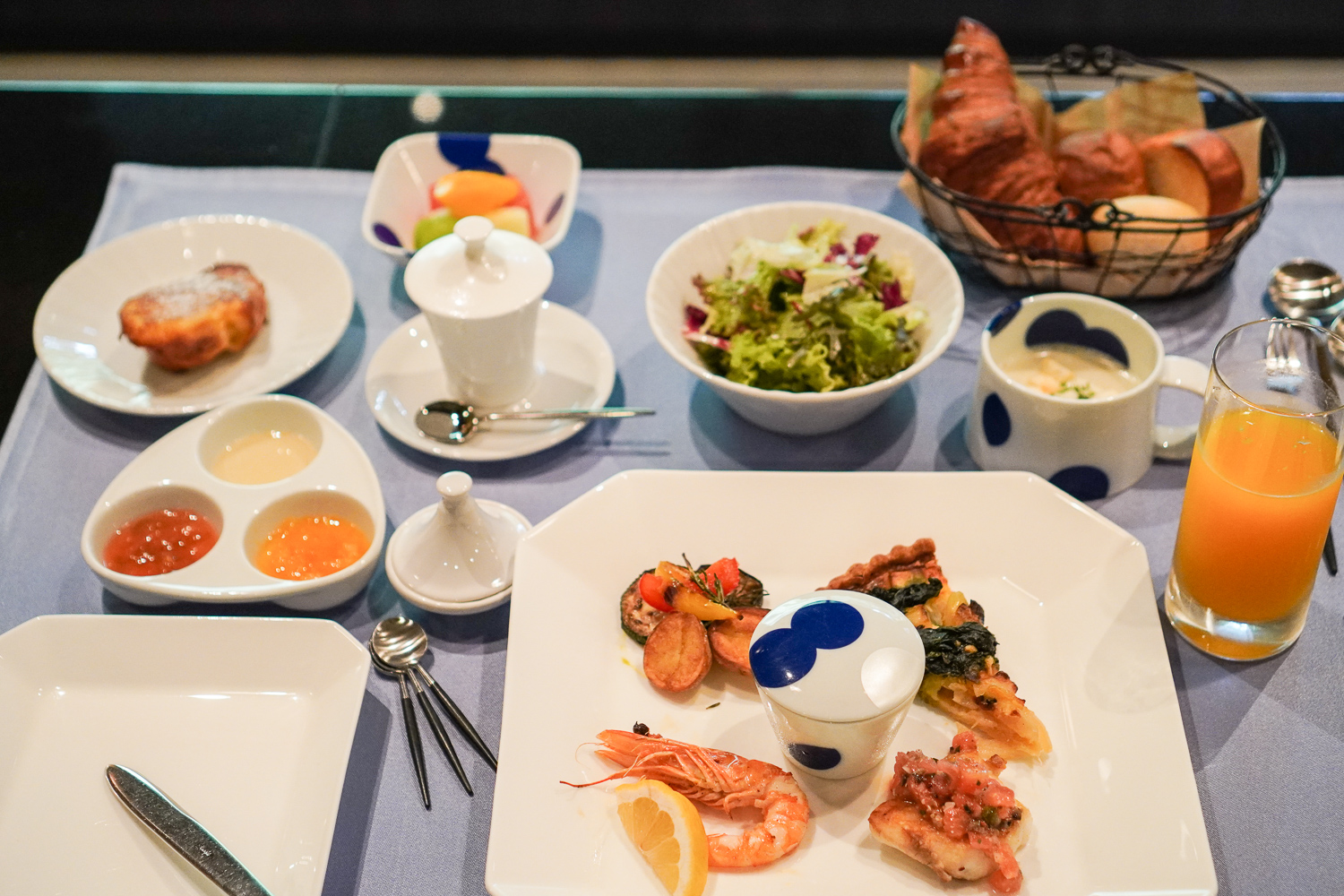 Gosho Bessho’s breakfast was western-styled and resembled a brunch. Lovely homemade yogurt, freshly baked croissants, and other delicacies made me hope I didn’t have to leave just yet.

Arima is easily reached trough Osaka or Kyoto with a direct bus. From the direction of Kobe city, a local train is the easiest option. Just be careful with timetables as they tend to get fewer on the countryside. If you’re coming from all the way from Tokyo, take a shinkansen to Kyoto or Osaka.

Goshoboh is conveniently located – by the river, just a stone throw away from the bustling main streets. Gosho Bessho is a short walk further away towards the mountain, in old temple grounds. The pick-up service, of course, gives you a ride.

And how did I feel after the weekend?

Well, I couldn’t recommend more spending a night in a good ryokan. 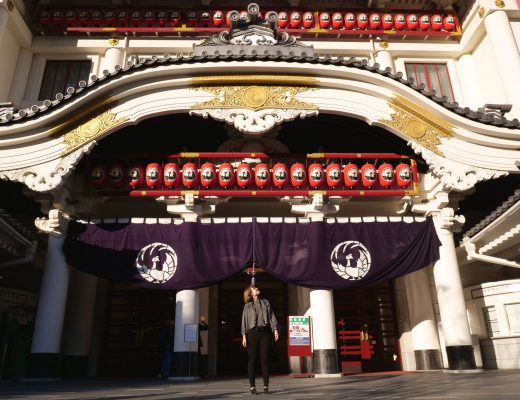 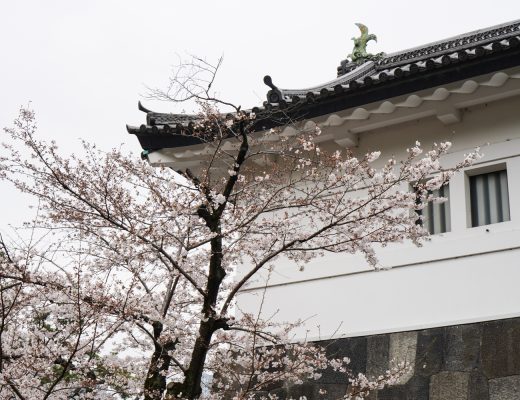 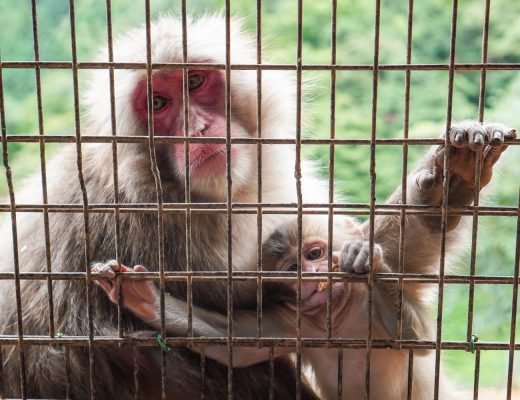 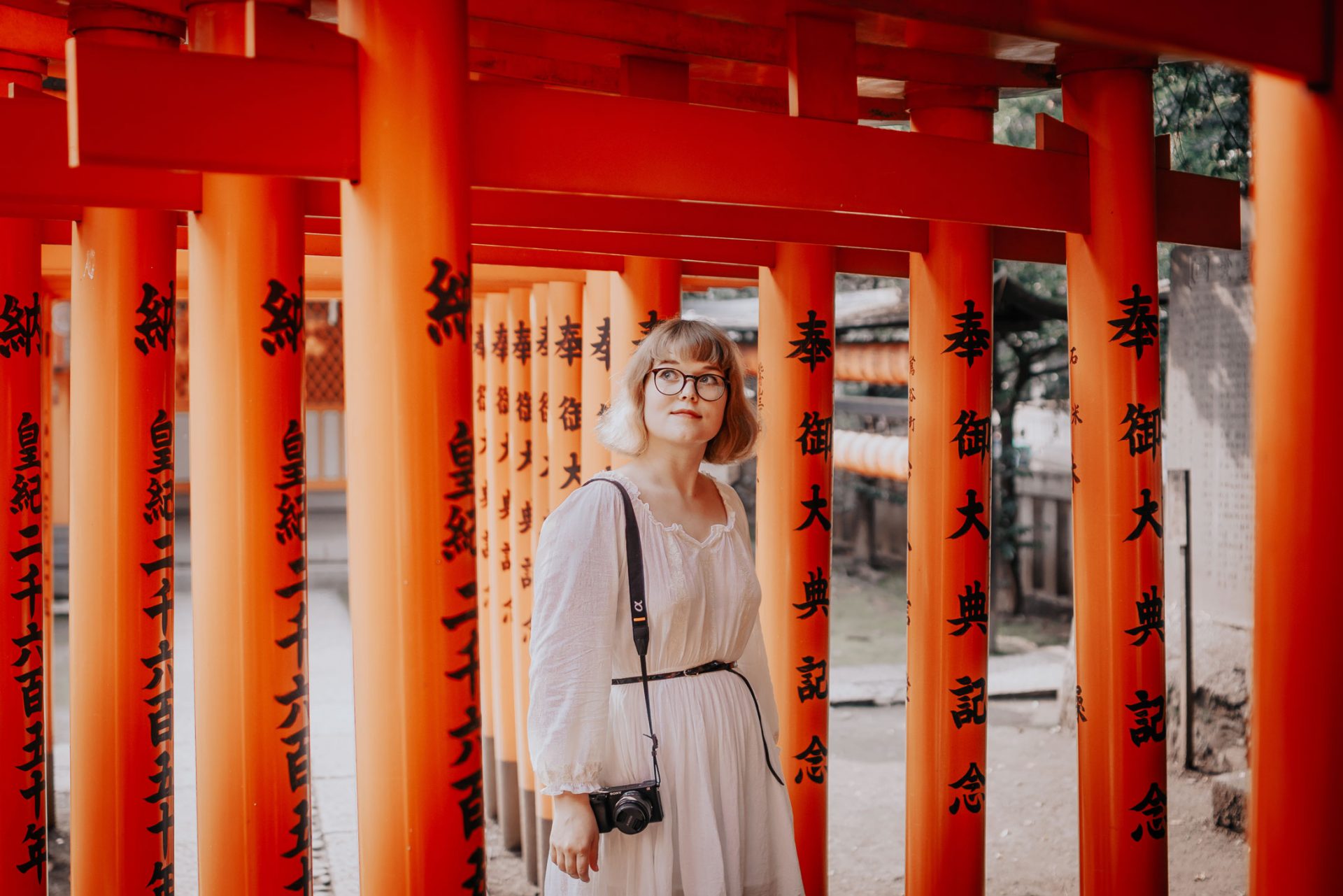