The main reason to come to Phuket was to attend diving trial. As told earlier, everything didn’t go as planned, and even the weather has been pretty poor in last few days. Well, the last reason for diving trial cancellation was the sudden sickness of the diving teacher, and when we wanted to use known and trusted company, Raya Divers, there was not much to do. But since we were in Phuket, the company suggested us snorkling tour instead, and that was fine with us.

The mini van picked us up from the hotel at 8.00 am. We and few other in that van were taken to the pier, where other vans brought more people, and we all entered the same boat. The trip to the destination, Raya Yai,  took 1 hour 20 minutes (slow boat). People were divided in groups by language and activity, and all groups had their own guide. We were the only Finnish participants, so we had private sessions with our guide Tiisku. First we were snorkling about one hour, then we went back to the boat to have lunch. After lunch we had still 45 minute session. It was very exiting to slowly move over the corals and see different kind of fishes and other living objects. In addition, the weather couldn’t have been better, almost sunny, and hardly any wind.

When diving and snorkling sessions were over, the boat took as back to the Phuket city, and then the mini van to the hotel. It was only 4 pm, so we decided to do some sunbathing by the pool before going for the dinner. 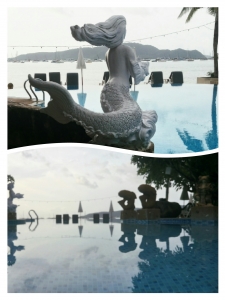 All in all the day and the activity succeeded well, despite the obstacles we met before hand.