I hate that question. I hate it! I don’t mind people asking it, but there definitely is a right and a wrong way to ask. I know it’s just a friendly question for an update, and also a very reasonable one since I’m dedicating the whole spring semester just for studying. But I don’t like answering it, because even thought I’m very proud of my process, I still have a little trouble with not feeling quity about not living up to expectations. In a nutshell – I’m studying for the entrance exam of Medical School in Finland, and the process is extremely difficult and stressfull. The average time of tries (you can only apply once a year) is 3.8, there are about 8000 applicants each year and only about 600 spots in the whole country. Doesn’t sound too good in numbers, does it?

But, it is what I want to do. Study medicine that is. Finland isn’t actually my first choice as a country, but there are many reasons why it would be great to study here. And every year about 600 people get in, and no one can say that out of all those people one couldn’t be me.

But the process is really, really wearing. There’s people who are more chill about it and people who have a better base for acquiring all the needed knowlodge. And then there’s people like me last year, who are emotional wrecks, who’s minds are messier than a bachelor’s apartment, and because of all the other things they’ve been doing, do not have a sufficient base of knowledge.

Last year I graduated from high school with rather good grades, and definitely way too much work behind me. No one forced me to choose that high amount of work( in fact, they actually told me not to) and I definitely wouldn’t do it again, but I also don’t regret it. I don’t regret almost anything in general, but I definitely would have wanted to keep a different mind set last year. After having done all my 9 matriculation exams while spending the nights at a prep course for med school, I had a few days off and then got to the real process of the med school entrance exam. And it was just too much. My body and my brain were completely out of energy, and trying to do a process that often takes 9 months in just one full month was just too much. About two weeks before the exam I finally saved myself from an utter burnout and decided that I quit studying for the entrance exam and will try again next year. It was a great call – I was much closer to an utter collapsing than even the people close to me know.

It took me over 6 months to fully recover from that. I was depressed, anxious and incredibly dissapointed in myself because I couldn’t live up to my and everyone else’s expectations – especially because I hadn’t gotten the perfect grade at any of my matriculation exams either, where even the second best felt like a failure.

But now, I turned my life around, moved on my own, started a full time job, and after Christmas started the same studying process again. I was really afraid – I was scared that I’d just bring myself to the same situation again. But instead of that happening, I realized that I did actually learn from my mistakes and now I’m studying on my own terms, no one elses. I’m consciously trying to avoid people who put pressure on me, and I’m consciously avoiding the feeling that I’d have to succeed perfectly this year. And surprise surprise, I’ve learned my subjects 10 times better than I did last year. And I’m super proud of myself.

I might still run out of time, but this time I know it won’t take me 6 months to be able to open the books again. If I don’t succeed this year, I’ll start trying again. Because I know my limits, I know how to handle my stress, and I know I’m only doing this for myself. That’s what gives me comfort – because I’ve already been to such a low place twice actually (also the year before when I was also doing too much and didn’t really take a long enough break after that), I don’t want to ever get there again, so I’ve slowly but surely been building up my calmth and I know I’ll always carry that in me and will eventually become a great doctor. It might take a while, but I’ll also make the while count so that’s okay.

I like to be open about my issues, because I know I’m not the only one with similar thoughts and I want to spread the importance of taking care of one’s self and also the joy of the better that can come after even an utter exhaustion. I am aware that to some this seems like pure exaggeration, complaints and other negative things, but that isn’t really my problem – that’s the problem of the reader who decides not to have empathy. You can never know the pain another person is feeling, so you should never pretend that you know it better than that person. You can only give support, cautious help and joyful things for that person to help them help themselves. I had a lot of those people, and I’ll for ever be grateful to them. I hope that if you’re in need of some, you’ll find them too.

Have a lovely week and take care of yourselves, we can do anything but we can not pass the limits each of us have in certain situations. They are called limits for a reason. 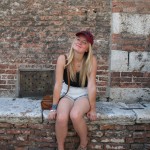 Hola! A 22-year-old student here, telling you how I sail through the sunshine and storms of my life. Roots are in Finland, exchange-home is in Ecuador, current home is in the Netherlands and heart is where ever my suitcase is. Most of my time I spend with my medicine studies, but on my free time I travel as much as I can and occasionally babble here about my adventures, that sometimes also include all kinds of stress and anxiety related troubles. Sharing is caring, as they say!